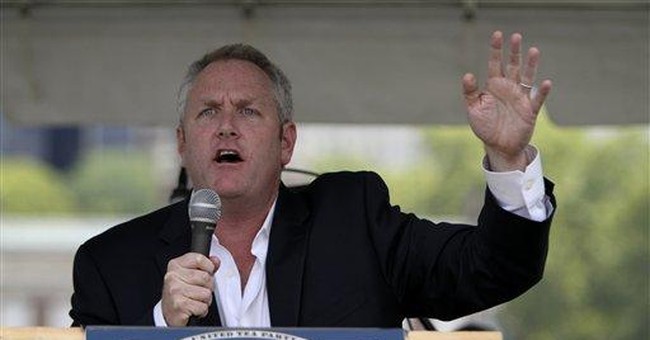 That the Tea Party has been under attack is not exactly news to Tea Partiers, though we are grateful that the rest of the country has finally taken notice. Much ado was made of the fact that the Tea Party seemed to wield a smaller political footprint in 2012 than in 2010, but nobody ever suggested that the reason for that might be that it was harassed away by its own Executive Branch. Perhaps things would have been different had Andrew Breitbart been alive, for nobody defended the Tea Party as passionately and tirelessly as he did. As the director of Hating Breitbart, which was released in theaters nationwide and digitally on May 17th, I had the distinct privilege of following Andrew during the closing years of his life, crisscrossing the country from Tea Party to Tea Party as Andrew defended its right to advocate on behalf of American Exceptionalism, small and limited government, and fiscal responsibility. I also watched him defend the Tea Party against false accusations of racism, radicalism, and violence - and, above all, I watched him indict the mainstream media for its complicity in spreading Obama's propaganda.

What I did not realize at the time, however, was that I was also documenting Andrew's parting gift to all of us - an instruction manual for how to fight back. We need this now more than ever before.

Censoring free speech seems easy these days: you simply frighten people into not speaking at all - that way you don't have to bother with suppressing what they may have already said. Such is life in the United States of America under Barack Obama in 2013. Dr. Anne Hendershott, a Conservative Roman Catholic, sociologist, and author, found that out the hard way. Dr. Hendershott apparently has a problem with the federal government telling Roman Catholics how to practice Roman Catholicism - so she wrote about it. The Blaze reported that after publishing a number of articles critical of Obama, Obamacare in particular, and George Soros, the IRS called her up and demanded to know who was paying her and "what their politics were."

Oh, but it gets better. If you're interested in starting a Tea Party, the IRS wants to join! Central Texas 912 President Maria Acosta was instructed to provide login information to their group's website, and the Richmond Tea Party was told to provide webpages "that are accessible only to your members."

Yes, you read that correctly. And no, we're not in the Soviet Union. The Soviet Union collapsed some years ago. This is something entirely new. This is Hope & Change.

In the case of Dr. Hendershott, her brush with our friendly Internal Revenue Agents was upsetting enough that she stopped her critical writings altogether. War on Conservative Women: Mission Accomplished. It's a good thing that Dr. Henderschott's middle name wasn't Tea Party or Constitution or Patriot or she might have been audited twice. It is difficult to overstate just exactly how un-American these IRS activities are - not allegations, mind you, but activities to which the IRS has already admitted.

By targeting individual Conservative dissidents, the IRS effectively trampled all of our First Amendment rights - and by targeting Tea Party organizations, the IRS has done nothing short of voter suppression. American Citizens ought to be able to freely associate with one another, organize, and educate their fellow Citizens about our Constitution without having to fill out a single tax form, much less a 90 item questionnaire. If your goal is to prevent people from coalescing around a set of ideas and spreading those ideas during an election cycle, one way to stop them is to saddle them with paperwork and deny them the ability to raise money to get their message out - this is precisely what the IRS did and it amounts to a subversion of the electoral process, plain and simple.

If a private organization had done the same thing, like the Ku Klux Klan, for example, people would be serving very long prison sentences; instead, it is our own federal government, a government supposedly "of The People," which has conspired against its own citizenry. And just think - we have very recently, through a tortured version of the democratic process, just conferred even more power upon the IRS. Now this arm of the Executive Branch, a service, mind you, in case you've forgotten, will be lording over our health care as well - and, in a dramatic twist that is as horrifying as it is dumfounding, the person in charge of the IRS division that targeted Obama's political opponents, Sarah Hall Ingram, is now in charge of the IRS division enforcing Obamacare! Now that we've passed Obamacare, we get to find out what's in it. Here's what's in it: don't criticize your government, or you might just be subjected to a lengthy and intrusive questionnaire before you're assigned a doctor. Need Chemotherapy? Give us your email password. Need your hypertension meds? Tell us what books you've been reading. Liberty!

The abuses which have recently come to light are exactly the kinds of big government intrusion that the Tea Party tried to warn all of us about, which is exactly why the Obama administration did everything it could, short of murdering Tea Party leaders, to silence it. It didn't work out for them, and now the rest of the country is thankfully catching on - everybody except for Julian Bond, of course, former chairman of the NAACP. When recently asked if the IRS had overstepped its bounds by subjecting Tea Party groups to such scrutiny, he said no, explaining it was "entirely legitimate." When asked if the scandal might revive the Tea Party movement, he responded, "I hope not...they're the Taliban wing of American politics."

Got that, Tea Partiers? Julian Bond, alleged Civil Rights leader, is happy to hear the government has, in the words of Our Declaration of Independence, "sent hither swarms of Officers to harass" you. Why? Because Julian Bond is somehow under the impression that when you're not advocating on behalf of limited government, liberty, and fiscal sanity, you're busy mutilating newborn baby girls, hanging homosexuals, and crushing in the heads of young women who wear jeans or want to go to school or disagree with their husbands. Assuming he actually believes what he says, where could he have possibly gotten this impression?

Andrew Breitbart would have argued that Julian Bond is a victim of the media, the only force powerful enough to warp one's perspective so radically. I'm fairly certain that Breitbart, rather than becoming angry with Julian Bond, would have felt sorry for him. The only way that an otherwise intelligent person can reach such absurd conclusions is if that person is manipulated into believing the absurdity. This is how Michele Bachmann, who raised 23 foster children, becomes a monster. This is how Sarah Palin, who upturned a corrupt GOP establishment in her home state, becomes a ditzy tart. This is how George W. Bush, who read hundreds of books during his tenure as President, becomes a stupid cowboy. This is how the Tea Party, which only wants what it believes is best for this country, becomes a bunch of "admitted racists" and the "Taliban wing of American politics." And that is how the IRS can harass specific political groups, suppress free speech, and subvert the electoral process with hardly anyone noticing for years.

I hate to disappoint Mr. Bond, but I do think that this scandal will go a long way toward rekindling the flames of the Tea Party movement. Outrage is not strong enough of a reaction, for outrage alone is passive and does nothing but raise blood pressure. What is needed now is action - and the first step is educating yourself as to how this could have happened, how you can resist it, and how you can reverse it.

Andrew Breitbart has already laid out a blueprint for you.

Hating Breitbart released in theaters and on DVD/VOD on May 17th. For more information visit www.hatingbreitbart.com.