Amy Clark
|
Posted: Jan 19, 2019 12:01 AM
Share   Tweet
The opinions expressed by columnists are their own and do not necessarily represent the views of Townhall.com. 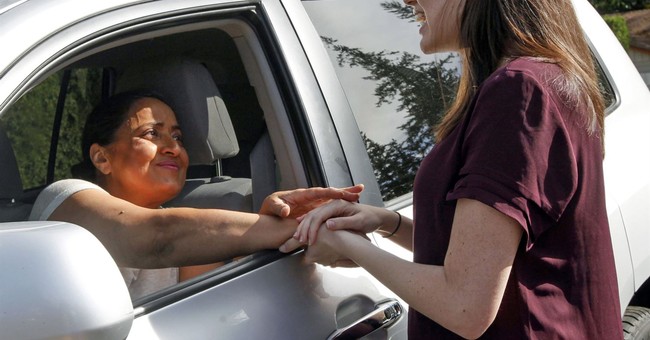 This Saturday, what’s left of the once-vaunted “Women’s March” will descend on Washington D.C., wearing their signature pink hats, chanting in unison and trashing our nation’s capital with offensive signs and slogans. While pretending it speaks for all women, this March promotes a far-left, socialist, pro-abortion agenda. Far from being inclusive, they refuse to acknowledge the voices of any women who don’t fall in line with their radical narrative or fit their preferred demographics. (A shocking reality in 2019, to be sure.)

A narrative so radical, in fact, that even the Democratic National Committee has pulled its name from a list of sponsors of the event. In fact, less than half of the partners they listed for last year’s event have signed on for 2019. While worshipping at the altar of intersectionality, the current organizers of Women’s March have failed to distance themselves from the anti-semitism that lies deep at the heart of the movement.

Nevertheless, some women will persist in putting politics over principle, turning a blind eye to hatred in their own ranks while continuing to march over anyone who dares to oppose their agenda. Marching, in their own words, for everything from “environmental justice” to the “rights of workers” to “immigrant rights” and so much more. This movement that prides itself on inclusivity, will march for the rights of all these women. Except, of course, for those deemed unworthy of inclusion: conservative women, pro-life women, Jewish women who speak out against anti-semitism, and the most helpless and vulnerable females of all… those still in the womb.

Are there real problems faced by real people in the country? Yes, every single day. But common sense women know that the real issues facing this nation won’t be solved by hashtag justice, slogans on signs or marching with megaphones. Many of us are “woke” enough to understand that our true impact in this life is measured by the difference we make in the lives of others -- our families, our communities and our nation. That’s why when it comes to our freedom, our values, and our country’s future, we can’t just talk the talk… we have to walk the walk.

Women across the country are “resisting” the toxicity of the Women’s March and instead choosing to make January 19th a nationwide Day of Service. Imagine, thousands of women setting down a personal agenda and taking action to serve others -- this is how we change hearts and minds to change our world.

And unlike the Women’s March, this movement truly is open to all. We are called to love our neighbor… even if that means putting our personal politics aside. Imagine if, for even just one day, we could come together to make a difference in our communities. What if it didn’t matter who the person working beside you voted for? What if for one day, we could set intersectionality and identity politics aside, and just focus on the “content of their character?”

What if thousands rejected the hate-mongering and instead made the conscious decision to set differences aside and spend a day putting others above self?

Or, driven by anger and vitriol, we can keep screaming slogans at each other, one-upping fellow women by claiming victimhood status or playing the shaming game with those of whom we disapprove. And as long as people are screaming, others will think they have to be even louder to be heard. So they keep screaming.  And the cycle of noise goes on and on, with no peace and no productivity. Let it end here, at least for one day, on January 19.

This Saturday, women across the country have a distinct choice. Accept your marching orders from those who march for the rights of ANYONE but those who hold a different point of view. Or, join women -- of all politics, colors, backgrounds -- women actually seeking to make a positive difference in the lives of women and families everywhere by giving of themselves.

As for me, the something I can do to make a difference -- perhaps the most important thing I can do -- is to choose to serve. In serving, I am choosing to empower others, to share my blessings, to humble myself, to lead by example, to love my neighbor, to authentically strive for a better community.

Real change happens when we work to be the solution -- not hatefully shout at one another about the problem. This is #WhyWeServe. Join us on Saturday and serve to change the world!

#BeTheLight in your community this Saturday, January 19th. For a list of service ideas, please visit: https://momsmarchusa.com/day-of-service-project-ideas/