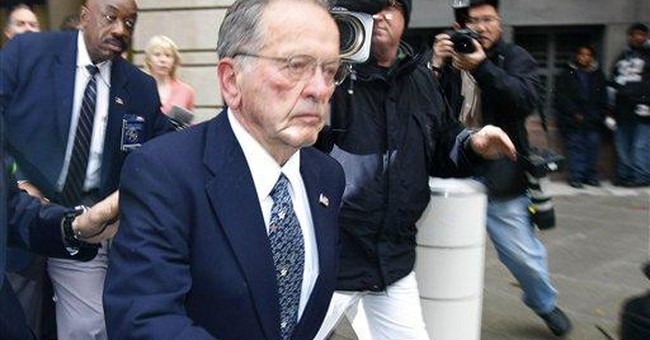 Republican senators are reluctant to take a firm stand to eject their colleague Ted Stevens from the GOP caucus before the outcome of his re-election race is determined.

Jim DeMint’s (R.-S.C.) calls to strip Stevens of his committee assignments and deprive him of participating in leadership elections have gained little support from the leaders of his party who have promised again and again they would take action to restore their party’s credibility.

Senate Minority Leader Mitch McConnell has called on Stevens to resign after he was convicted of making false statements on his financial disclosure forms, but McConnell and others are refraining from making any commitment to oust Stevens until it's clear he will retain his seat in the next Congress.

Leader McConnell, did however, tell the Kentucky Herald-Leader if Stevens does not resign, "there is 100 percent certainty he would be expelled from the Senate."

DeMint wants the GOP to take action against Stevens now. He's demanding a behind-closed-doors vote on whether or not the Alaskan senator is welcome in their caucus next Tuesday morning.

Stevens is reported to be privately calling Republican senators to ask them to delay any judgment until his appeals process is completed, which could take years.

Like McConnell, other Republicans are willing to hold off until Stevens’s votes are counted before taking a position.

Sen. Saxby Chambliss (R.-Ga.), deadlocked in his own contentious election recount and Sen. John Ensign (R.-Nev.), chairman of the National Republican Senatorial Committee, said in a Wednesday press conference they believed Stevens should be removed, but only if he wins his race.

Chambliss told the Atlanta Journal Constitution, “I hope Sen. Stevens is successful in being reelected. And assuming that he is, I intend to support any motion to remove him.”

Ensign said, “It’s probably better to let Alaska — it’s probably going to take a while to count all the votes up there — let that take place, then after the first of the year.”

Sen. Mel Martinez (R.-Fla.) told Roll Call, "If Sen. Ted Stevens were to be reelected, I think it would be very difficult, as a convicted felon, that he should remain in the conference. I think the Republican Party needs to send a signal that we are at a moment of time and at history that we are not to tolerate that."

"My position has always been we have due process rights in our Constitution," Crapo said. "Until a person has been allotted all of their rights, we should withhold judgment."

Stevens was convicted of seven corruption charges in late October.