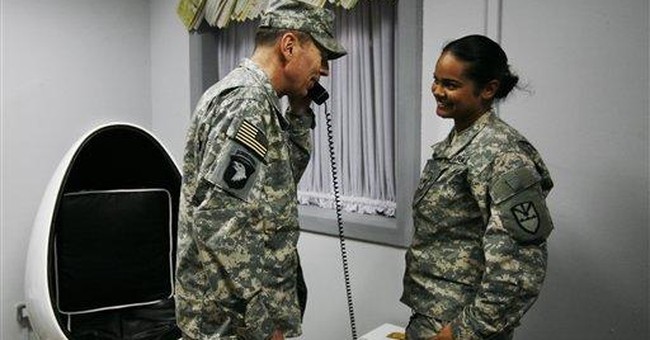 Democrats are tying Iraq war spending to a flagging U.S. economy in hopes of securing more tax dollars for domestic agenda items in the run-up to scheduled testimony from senior Iraq officials.

She said the war was causing “economic pain” at home and cited rising costs of healthcare, education, gasoline and groceries. “Consumer prices for staples such as milk, bread and eggs rose by the largest amount in 17 years,” Pelosi said.

“Look at what President Bush has done,” Emanuel said alongside Pelosi on April 3. “This is the president of the United States that, while he has expanded hospitals in Iraq -- 20 hospitals in Iraq, 80 new clinics -- he's vetoed a children's health care bill for 10 million children, and his own budget proposes $178 billion cuts in Medicare and Medicaid. While we are building 6,700 schools in Iraq and training 60,000 teachers in Iraq, the president's budget here at home cuts funding for education and teacher training programs and reading programs, and in fact does not fully fund the Leave No Child Behind program.”

Army General David H. Petraeus and Ambassador Ryan C. Crocker will testify before House and Senate Armed Services and Foreign Relations Committees Tuesday and Wednesday. After their testimony concludes, the House will take up a supplemental war spending bill to continue funding the war, which the Democrats may be willing to hold up in order to tack on additional domestic spending items.

“There are obviously needs in addition to Iraq that are being discussed and I would tell my friend that those discussions are ongoing,” Hoyer said to Blunt.

Hoyer explained: “A decision on what may or may not be added in addition to the supplemental that may be necessary for Iraq, there may be other things. That decision has not been made at this point in time. But I do want to let the gentleman know that that is under discussion. As the gentleman will recall, last year when be-- when we passed the supplemental, there were domestic priorities that were also addressed, in particular, Katrina, as the gentleman will recall, and some other members as well. That's under discussion.”

The House Appropriations Committee plans to vote on the war supplemental on April 16.

“I really resent it,” he said in a conference call Monday. “I use that word purposefully. In a sense, it’s blackmail against our troops as a hostage to the Democrats’ desire to spend more money on their favorite projects.”