Obama Has Spent Only Two Days in Iraq 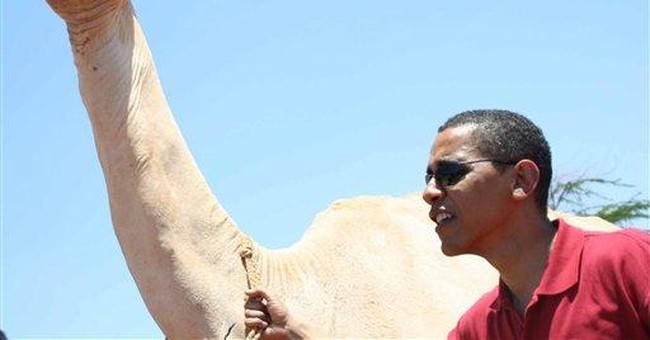 U.S. Senator Barack Obama (D.-Ill.), who calls for speedy withdrawal from Iraq on the presidential campaign trail, appears to have only spent two days in the Middle Eastern country.

Obama was part of a congressional delegation, called a CODEL, led by Sen. Evan Bayh (D.-Ind.), to Iraq in January 2006---a year before President Bush announced his plan to send a “surge” of troops to Iraq in his 2007 State of the Union speech.

In January 2007 Obama introduced the “Iraq War De-esclation Act” to require all troops to be removed from Iraq by pre-determined date. It was that same month the President sent 21,500 more troops to Iraq, a decision Obama has decried but has made no return trips to Iraq to see the effects of.

In August 2007, Obama confirmed with The Hill he had only been to Iraq once. Townhall found no subsequent reports indicating any other trips and it is highly unlikely he has taken time away from the presidential campaign trail for a secret visit in the interim.

Inquiries to Obama’s office to find out if the Illinois senator has been to Iraq since August 2007 were unanswered.

A spokesman for the State Department’s Bureau of Legislative Affairs, which oversees foreign travel for members of Congress, said he could not release information about senators’ publicly funded trips to Iraq or other countries. “It’s not a secret or anything, it’s just something they [the senators] should confirm,” he said. “We don’t want to speak for them.”

While Obama is likely to have only spent two days in Iraq, he has found time to make a two-week trip to Africa and conduct a fact-finding mission in Russia. News reports and press release from Obama’s Senate office show Obama took a 15-day trip to Africa in August 2006 to raise AIDS awareness and promote his book, “Audacity of Hope.” He traveled to Russia in 2005 with a delegation led by fellow Senate Foreign Relations Committee member Sen. Richard Lugar (R.-Ind.), to visit nuclear sites. On that trip, he also visited Ukraine, Azerbaijan and England.

Obama’s top rival for the Democratic nomination for President, Sen. Hillary Clinton (D.-N.Y.) has visited Iraq three times. She completed her last CODEL in January 2007, shortly before she announced her intention to run for the Democratic nomination for President. Clinton has made recent headlines by attacking Obama for his inexperience in foreign affairs by pointing out he has not held oversight hearings on the Senate Foreign Relations Subcommittee on European Affairs, which he chairs, because of his presidential campaign schedule

Sen. John McCain (R.-Ariz.) the presumptive presidential nominee of the Republican Party, often discusses his trips to Iraq and military experience while campaigning. As of August 2007 McCain had taken six trips to Iraq.