The Purpose of Vacuums 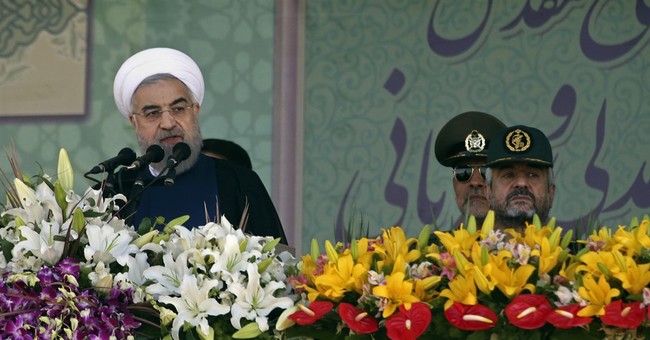 As I write this missive, it is Monday morning and I am in New York City at the Roosevelt Hotel. I am here for the London Center for Policy Research American Liberty Award Dinner. I did my NYC ritual of running Central Park and here in the room typing I heard the housekeepers start their ritual of taking care of the cleaning and maintenance of the floor – the sounds of the vacuums.

The intended purpose for vacuums is to clean, pick up dirt that we cannot often see with the naked eye. They are also helpful in clearing up debris and water after disasters. I remember one of my chores growing up in 651 Kennesaw Avenue in Atlanta was to vacuum the house. We had a monstrous Hoover system, man was that thing loud, but it did the job. And you knew so when you changed out the bag and saw what it had picked up.

But when it comes to foreign policy there is another type of vacuum.

Back in August 2011 I was part of a Congressional delegation visiting Israel and we had the pleasure of meeting with Prime Minister Benyamin Netanyahu. I will always remember his warning about vacuums, he advised us to not withdraw our military force footprint from Iraq. PM Netanyahu stated that if you create a vacuum it will be filled.

And so it is, when we get away from the real purpose of a vacuum, cleaning up dirt, and create your own via a short-sighted foreign policy – you create dirt, mess and a disaster that will eventually have to be cleaned up. The Obama administration thought it more important to adhere to campaign promises, rhetoric, and rigid ideology and created a huge vacuum in the Middle East. Unless you have forgotten, the Obama administration’s stated goal was to “pivot away from the Middle East” and that included abandoning a position of strength in the region.

And in the past three years, look at the dust balls that have gathered under the furniture with this vacuum.

An enemy that was defeated has now reconstituted and has secured swaths of territory and driven out historic communities. ISIS would not have been able to bring itself together if we had maintained the requested residual force in Iraq of 10,000-15,000 troops. As well, Iran would not have been able to become more of an influencer in Iraq if we had maintained a residual force in Iraq.

Perhaps, if there were still American leadership in the Middle East, Syria would not have descended into the deplorable situation which is having immense ramifications experienced all the way to Europe.

The Obama vacuum is not like the Hoover vacuum I used as a little kid. Instead of picking up the dirt by sucking it into a bag, this new model blows out the dirt and creates conditions by which it can thrive. The Joint Comprehensive Plan of Action (JCPOA) certainly does not clean up any mess; it exacerbates it and creates a disaster of grand proportions. Consider the strategic footprint the United States once had when it came to geopolitical positioning regarding Iran. Our forces were arrayed in Iraq and Afghanistan, a perfect posturing to keep watch on the number one state sponsor of Islamic terrorism.

However, America is on the verge of being the largest financial supporter of Iran’s cause as we release hundreds of billions of dollars to the militant regime. And with those funds, enabled by the vacuum created by the policy of the Obama administration, groups like Hamas, Hezbollah, Islamic Jihad, Al Aqsa Martyrs, Al Quds, the Houthi’s, the Iranian Revolutionary Guards Corps, and the Quds Force will thrive and more dirt will assemble.

And the Obama model vacuum coupled with mismanaged “red lines” has resulted in the sustainment of one Bashar Assad – the fella who supposedly just had to go.

So now, guess who is in the Middle East selling his new vacuum cleaner model, the Putin. Yes, when a geopolitical vacuum is created, someone will indeed fill that void. And now we have Russian forces and military equipment in Syria, flown there by way of Iran, to prop up Assad and potentially defeat ISIS. I find it rather comical that Vladimir Putin has once again used his Obama-granted “flexibility” to outmaneuver the community organizer in the grand “Game of War.” Putin has deployed ground forces – yes, Russia has “boots on the ground” – to fight against ISIS and other Islamic terrorist groups, such as Al Nusra.

Putin has called for a coalition to join him in defeating the vile, savage, and barbaric Islamic group seeking to establish a caliphate in the heart of the Middle East. Russia’s foreign minister has warned the United States of “unintended incidents” which means battlespace conflicts between forces. The Obama administration has responded by saying it would seek to “deconflict” the battlespace with Russia and its deployed forces and assets.

Could it be that Vladimir Putin could end up being the key influencer in the Middle East and his regional proxies being Iran and Syria? President Obama’s solution was to spend $500M to train Syrian rebel forces. With the expenditure of some $42M of those funds, 54 Syrians were trained, all of who have been killed or captured. Sadly, Obama’s explanation of this failure was that he never wanted to do anything – his critics forced him into this action.

Consider that this week the leader of whom I referred at the beginning of this missive, PM Netanyahu, is traveling to Russia for a meeting with Putin. Remember his warning to our congressional delegation?

Vacuum’s are meant to clean up messes. When a foreign policy is based upon creating a vacuum, it leads to a mess that perhaps there may not be a big enough vacuum to EVER clean up.

Such is the evolving geopolitical situation in the Middle East. Perhaps this is what we should be discussing, and not whether or not a Muslim should be president.