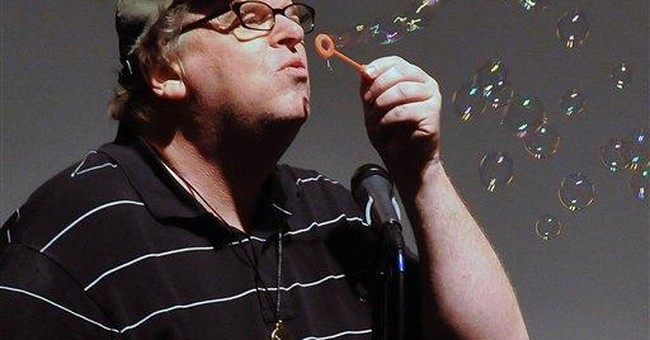 Moore's newest film, “Capitalism: A Love Story,” debuted in theaters this weekend. I did not attend. When I fork out my hard-earned cash for entertainment, I do not like to support ignorance and gall. When I view documentaries, I prefer for the writer and producer to have a functioning knowledge of the subject upon which he or she opines. Sadly, my self-imposed prerequisites for participation prohibit me from being able to enjoy Moore's work.

Remarkably, Michael Moore fails to see the irony dripping from his own ability to profit personally in mammoth proportions from his anti-capitalist tirade. According to Fortune magazine, Moore's films have grossed over $300,000,000 worldwide, and his personal fortune is in the neighborhood of $50,000,000. Good for him. A worker deserves his wages, and Moore has worked hard to tell his stories.

However, Moore exhibits a credibility gap when his new movie concludes with statements like, “Capitalism is an evil, and you cannot regulate evil,” and "You have to eliminate it and replace it with something that is good for all people and that something is democracy."”

First, let us not spend time educating Moore on the difference between an economic system (capitalism) and a political system (democracy). Clearly, facts do not matter much in his world of documentary fiction.

Rather, let us note that he may be the biggest self-deceiver of them all, not to mention a first-rate hypocrite. To amass a personal fortune of $50MM through a system you call intrinsically evil is to participate in, and be complicit with, an intrinsic evil. Would Moore say that his work is intrinsically evil? Probably not. Are his outlandish comments not a lot like a wealthy abortion doctor's railing against Roe v. Wade and pontificating on the sanctity of human life?

Moore tries to distance himself from capitalism even as he effectively maneuvers his way to personal profit. When asked recently by a reporter how he reconciles his participation in and profit from the “evil” system of capitalism, Moore replied, “Well, capitalism did nothing for me, starting with my first film.” “You know, I had to pretty much beg, borrow and steal,” he said. “The system is not set up to help somebody from the working class make a movie like this and get the truth out there.”

In other words, poor Michael had to struggle as a start-up entity. Much like Apple's starting in a garage.Much like McDonald's starting with a single location. Much like every other entrepreneurial venture ever launched in capitalist America. Is Moore ignorant of the basic principles of private capital and private ownership? Or is he the supreme manipulator, spouting propaganda he does not really believe in but laughing all the way to the bank? The former appears more plausible.

Not only does Moore not understand the difference between capitalism and democracy, he also does not understand the basic concepts of risk, reward, and the possibility of failure. Any of us who has launched a new venture knows well that failure occurs more often than success and that good ideas succeed only when they meet good leaders, good marketing, and good consumers. Moore is not alone. In fact, he is the norm in spite of his egocentric martyr complex. New ventures struggle. Period.

Moreover, competition for capital and for consumers spurs innovation and excellence. Moore likes to critique America's partially capitalist health care system, but there is a reason that, according to Lancet Oncology, Americans have the highest survival rate for 13 of the 16 most common forms of cancer. At least in part, that survival rate can be attributed to the innovation in technology and treatments spurred largely by private capital investments and by firms seeking to gain a competitive advantage. Capitalism is by no means perfect, but it is the best economic system designed to date.

Michael Moore somehow thinks he is the first person to have scrapped, scrimped, and saved to venture out with a new product or idea. Evidently, in his mind, “capitalism” helped everyone besides him. Michael created his own success. Others merely were assisted by some mysterious, nebulous capitalist “system.”

Worse, Moore ignores the basic moral facts around capitalism as an economic system. Michael Novak has well-demonstrated the positive moral good created by a society rooted in democratic capitalism. Novak's work has been so persuasive that Pope John Paul II shifted his own thinking from a more socialistic worldview to advocating for the good of capitalism. Perhaps Moore failed to read these thoughts from Novak and the deceased pontiff in his days as a Catholic.

For example, capitalism has the unique ability simultaneously to create new wealth and also to lift human beings out of poverty. Forbes magazine's recent work demonstrates that in China and India alone, capitalism is responsible for lifting between 500MM and 1BB people out of poverty in just the last two decades. And estimates are that capitalism has raised close to 2BB humans out of poverty in the last half-century. Indeed the last twenty-five years have been the most prosperous in world history. Not bad for an “evil” that cannot be regulated.

My faith teaches me that caring for the poor is a central expression of one's love for God. As a current or former Catholic, Moore should believe the same. Indeed he said at the Washington premiere of his new movie, “...I have an extra responsibility to make sure I spend my time trying to make things better for the people that don’t have what I have, right? I mean, everybody should do that.” On that, Michael Moore and I agree.

Does Moore know of a system better than capitalism for improving the economic lives of human beings? If so, he should share it. If not, he should keep his empty thoughts to himself. As I await the answer to that question, I will spend my money and my viewing time elsewhere.