Alex Smith
|
Posted: Jan 27, 2016 12:01 AM
Share   Tweet
The opinions expressed by columnists are their own and do not necessarily represent the views of Townhall.com. 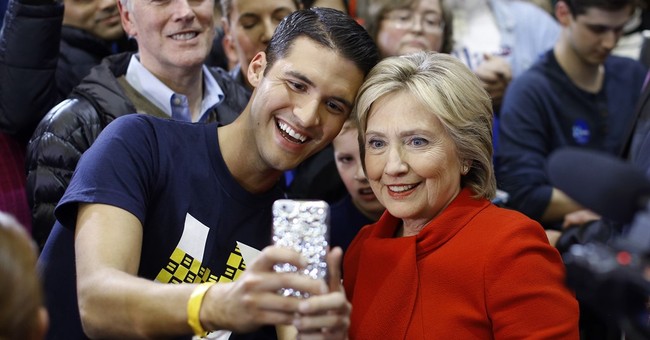 Bernie Sanders is right about one thing: Hillary Clinton is Wall Street’s candidate of choice. It’s where she has been leading the real “War on Women” with the good old boys for years.

Small businesses, entrepreneurship, and risk-taking have long been the engines that have driven the American economy. So why did liberals start waging an all out assault on these foundational values the very moment women rose to parity with men in these measurements?

Do you ever wonder why more Wall Street campaign cash feeds the war chests of Democrats than those of Republicans? It’s because with another lawyer and another lobbyist, these Masters of the Universe can tilt the playing field and tip the scales in their favor. They do just fine in a closed economy.  Their money and influence preserves the status quo, placing the job-killing policies and regulations of big, old, top-down Washington squarely in the way of small business owners’ success. And as the top driver of small businesses in this country, women are hurt the most by their greed and arrogance.

For all of Hillary’s tough talk on Wall Street during the Democratic primary, it’s easy to see through the partisan dog-whistling. Wall Street executives were the largest donors to both her 2006 Senate re-election bid and her 2008 presidential campaign. All told she raked in $2.67 million from just eight firms in those races. Moreover, she personally made $3.15 million in 2013 alone from speaking to a list of Wall Street firms that reads like a “Most Wanted” poster for the housing crisis. When confronted about her sudden change of heart, one of Hillary’s top Wall Street donors remarked, “it’s just politics.”

Maintaining the status quo might be easier to accept if it was working.  The reality is their political and artificial controls have functioned to put fewer dollars in women’s take-home pay as compared to men. According to the Census Bureau, median inflation-adjusted income for women has fallen by nearly four cents on the dollar since 2009. That wasn’t true for men; they actually saw their income rise during the same period. Even more tragically, under the current administration, two million more women have fallen into poverty.

Liberals will find any way to justify the mess they’ve created. They’ll say we need these regulations to keep us safe, or government knows what works best for a particular industry, or they’re just trying to protect us.

What they should say is they don’t trust a small businesswoman to plant the seeds of growth in her own community where she lives and works, and that big, old government is going to come in and show her how it’s done. Their feigned outrage, and government-knows-best routine can’t hide the ugly truth: liberals are waging the most deceitful war of all on women.

How do we know it’s aimed at women?  When men were still creating more new businesses, more college graduates, and more small business jobs, even Democrats like Bill Clinton endeavored to reduce the burden Washington put on them.

Republicans understand the advancements in our economy come from each of us being connected like never before.  We have tools and information at our fingertips that opens the world to us – and each of us acts on that connectedness every day.  We’re empowered to make the best choices for ourselves, and we do it lightning fast.

Washington doesn’t know our needs, preferences, or how to run our lives.  Even if it did, the old structures in Washington were built decades ago to fit a much less complex economy, a conformity accepting culture, and a pace of innovation that was a fraction of today’s pace.

The old, impersonal, top-down, and excruciatingly slow Washington way of doing things can’t keep up.  So they fall back to doing it the only way they know how: they make decisions politically and artificially, they limit our choices, and they close the economy off from too many possibilities.

In an open economy, the growth happens naturally.  We don’t have to wait for Washington to tell us how to live.  The organic growth in an open economy comes from women (and men) making decisions for themselves.

Women get a fair shake in an open economy.  We get to compete the same way men do, and our little businesses will start to become medium sized, and large businesses as the economy recognizes and embraces the best innovations and ideas – regardless of whether the creators of those ideas and innovations had the right political connections.

So the choice for women this election season is whether they want to create equal economic opportunity by opening up our economy to the power of natural, organic growth.  It’s time we recognize that old Washington’s political and artificial claims they must protect us from ourselves aren’t just wrong and outdated, but in fact represent the front line in the real war on women.