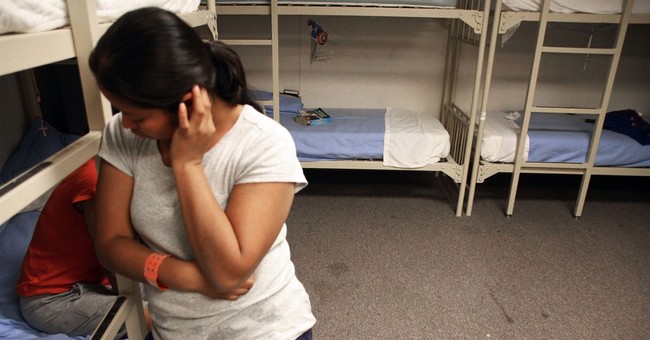 Critics of President Obama’s immigration policies describe them as violating the rule of law. According to Representative Steve King (R-IA), “Immigration enforcement has been under attack since our current president was sworn in, despite his constitutional oath requiring him to ‘take Care that the Laws be faithfully executed.’”

Ironically, these critics ignore one of the most egregious offenses to the rule of law on this issue: the systematic denial of due process in immigrant detention centers across the country.

This summer saw a large increase in unaccompanied child migrants coming over the border. But that surge masked an even larger boost in the number of families fleeing violence – a 412 percent increase in the last fiscal year.

These families are overwhelmingly mothers with children. Many claim to be fleeing domestic or gang violence and would face reprisals if they were returned to their home countries. Under American asylum law, if the parent of these families claims she was violently abused and the police in her country either did not want to protect her or were incapable of doing so, then she could be granted asylum.

Rather than ensuring these families can access a fair process to adjudicate their claims under the law, the Obama administration has stripped away many of their due process protections.

Interestingly, the federal government is not consulting with the local government of Dilley to build this facility. Last month the feds tacked on an addendum in a contract with a county in Arizona that subcontracts with a private prison firm that would allow for the detention facility to be built in Dilley. The County Commissioner in Dilley, Texasdescribed the process as, “[The feds] come in here and tell us, ‘We want your input on this and that,’ but the bottom line is they’ll do it anyway.” Once completed, each bed in the Dilley facility will cost taxpayers about $300 per day – about $260 million annually.

Detention centers in and of themselves do not deny due process, but it is very difficult to find an attorney and put together a complex asylum claim from behind bars. The remote locations of these detention centers also make it very difficult for lawyers to represent the families. The Artesia, New Mexico facility is about a three-hour drive from El Paso and four hours from Albuquerque. Short-term pro bono attorneys organized by the American Immigration Lawyers Association (AILA) have said they are working 12 hours a day inside the Artesia facility, with about 1 attorney for every 120 individuals in detention.

When the facility first opened, guards at Artesia, deliberately or not, made it difficult for attorneys to represent their clients. Attorneys were prohibited from using cell phones, laptop computers, and portable printers when visiting their clients.

The pace of cases and hearings for families is also too quick to guarantee a fair hearing. Commonly called a “rocket docket,” judges spend minutes hearing cases and attorneys have little time to prepare. As such, attorneys cannot adequately represent their clients. Immigration attorney Bryan Johnson said, “I've never seen violations of due process as extreme as what these families are facing.”

A detained Guatemalan woman who fled domestic violence so severe that she suffered a miscarriage was deported early one morning without her attorney’s knowledge – before she could even finish drafting her declaration to support the case. Rocket dockets limit due process.

Worse still, the Department of Homeland Security is not recommending bond for any detained family, regardless of circumstance, and opposes virtually all bond requests when a family appeals that decision to an immigration judge. The government claims that if these families are released on a bond while their cases proceed through the system, then people from their home countries will interpret that as an amnesty and many more will try to enter the United States, thus endangering American national security.

This presumption makes a mockery of due process and protection for individuals who have genuine fear of return to their home countries. Instead, the government’s solution is to lock up all families claiming asylum status – harming the families and costing taxpayers millions.

The government is using research authored by Dr. Jonathan Hiskey of Vanderbilt University as evidence that detaining asylum seekers deters further immigration. The only problem is that Dr. Hiskey doesn’t think his research supports the government’s position. “Neither my report nor any empirical study that I know of supports [the government’s] views on active migration networks and the detention of these women and children,” said Dr. Hiskey.

Immigrant attorney Bryan Johnson said these infringements on due process and the rule of law in the asylum system are causing immense harm. “The new rules are causing untold number of asylum-seekers to be wrongfully deported,” he said.

Something is very wrong with the immigration detention and judicial system when asylum seekers who are not accused of having committed crimes can’t post a bond because of a misreading of academic research. At the veryminimum, asylum seekers should have a chance to make their case without being treated worse than suspected criminals. Due process is a vital component of the rule of law and one that is being systematically denied to women and children fleeing violence. Any revival of the rule of law in the immigration system should start here.