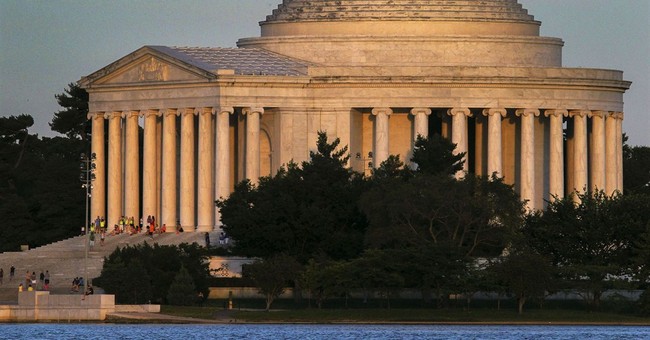 We hold these truths to be self-evident, that all men are created equal, that they are endowed by their Creator with certain unalienable Rights, that among these are Life, Liberty, and the pursuit of Happiness.

When Thomas Jefferson wrote these words, men throughout the colonies were preparing for war with a British empire that was predominant in every facet of military power. For this reason, many among in the British military did not take the colonists seriously and others within the British aristocracy openly ridiculed them.

The colonists were viewed as hayseeds with old rifles, little, if any, military training, and a lack of gratitude for King George III’s good graces.

Many of these things were true -- the colonists did have old rifles, many of them did lack military training, and, in 1776, a growing number of them resented King George more than they thanked him.

Yet the colonists had something that bound them together tighter than new rifles, military training, or gratitude to a king ever could -- and that was the conviction that liberty was a gift given by our Creator rather than our government: that all men -- rich and poor, educated and uneducated -- were created and “endowed with certain unalienable rights.”

At the time of his writing in 1776, Jefferson summed up these rights with the phrase “Life, Liberty, and the pursuit of Happiness.” And just over a decade later, as James Madison held the pen and our Founding Fathers gathered to write a Constitution, the freedoms that constitute “Liberty” were fleshed out and hedged in so that they would be protected from government intrusion as the years rolled by.

The first of these freedoms was and is freedom of religion -- “Congress shall make no law, respecting an establishment of religion.” So begins the First Amendment.

Conscience, guided by history, taught the Founders that governments which chose one denomination over another were governments headed toward despotism. So they not only barred the government from choosing one over another but even from interfering with religion in practice.

Therefore, after barring Congress from “respecting an establishment of religion,” the Founders blocked Congress from “prohibiting the free exercise thereof.”

So with the celebration of our nation’s founding at hand, and with an unprecedented number of attacks upon religious freedom coming from our current administration in Washington, perhaps no better time exists than now to familiarize ourselves again with the words and intents of our Founding Fathers. As we do that, we remember Jefferson’s emphasis on our being “created” and “endowed with certain unalienable rights.” And from Madison we remember that first among these rights is the freedom of religion.

In 1785, Madison explained his opposition to a governmental establishment of religion thus:

Whilst we must assert for ourselves a freedom to embrace, to profess, and to observe the Religion which we believe to be of divine origin, we cannot deny an equal freedom to those whose minds have not yet yielded to the evidence which has convinced us. If this freedom be abused, it is an offense against God, not against man: To God, therefore, not to man, must an account of it be rendered.

No, Kyle Rittenhouse Being Found Not Guilty Did Not Cause the Buffalo Shooting
Julio Rosas
Here We Go Again: Yet Another Democratic Politician Makes a Fool of Themselves Over Banned Books
Rebecca Downs