Alan Korwin
|
Posted: Apr 13, 2017 12:01 AM
Share   Tweet
The opinions expressed by columnists are their own and do not necessarily represent the views of Townhall.com. 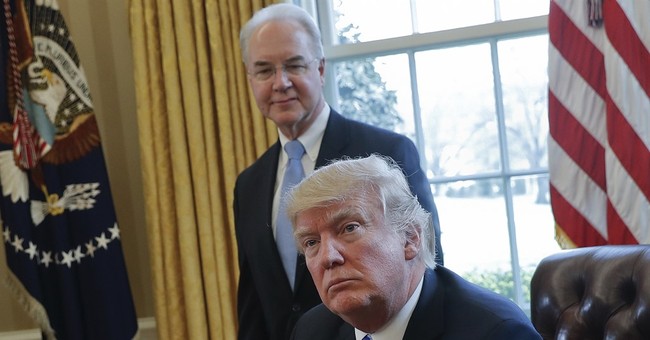 The world has now moved on, could Trump have planned it this way? Such prescience, such short public memory, could the president have done this deliberately? You remember—“GOP Concedes Defeat on Health Care Bill”!  –USA Today; “Major Defeat” –NY Times; “Trump Tastes Failure” –Reuters; “acute embarrassment” –CNN; “Dems Win on Obamacare!” –Nobody.

Or was it really Secret Plan A: Introduce a flawed complex bill on short notice, without adequate time for review, insist on rapid action, stir up frenzied opposition from your own team, on top of sound and fury from the usual suspects, watch the bill sink, just walk away, problem solved. Yes, solved.

Health insurance isn’t health care. Neither one is in the Constitution. Go look, they’re not. The U.S. Supreme Court can declare the Affordable Care Act constitutional all it wants, even contradict itself in doing so (by calling a tax not a tax, then reversing itself, and then ignoring the hypocritical double standard, NFIB v. Sebelius, 2012) but that doesn’t make it truly legitimate. The Court acts inconsistently a lot.

Congress has no legitimate delegated authority to run the practice of medicine, we all know that (along with the fact they’re eminently unqualified). The same for insurance. When Obama usurped power to abscond with nearly a fifth of the U.S. economy, and attempted to have federal agents run what doctors do, we realized we were on a road to perdition. From two billion dollars for a simple computer database (promised at $93 million) to a bill we had to pass to find out what’s in it, the Democrats' ACA was bad before it began. Now, under Trump’s watch, we’ll get to see just how bad. That’s a win.

You can thank whatever you pray to that some Republicans lost in their misguided attempt to takeover medicine. If what they’ve been saying is true—Obamacare is an abject disaster about to collapse—let go for Pete’s sake! Why save it? Think about the conniptions left-wing media is going to have then, with no one to blame but... Bush?

States are down to single insurers because health-care firms are hemorrhaging to death. Some counties have hit zero. Insurers can’t afford to stay put with the “savings” they’re not getting. The public is outraged by massive premiums increases... but at least their services have tanked. So many people didn’t get to enjoy the lie of “keep your own doctor,” how do you think they’ll vote after the media-praised Democrat plan implodes?

If Republicans understood this, they would have hastened its demise, not struggled to take it over. From its ashes a fabulous fresh Phoenix can effloresce. Watch the withered remains of a self-immolated illegal confiscation of our medical practice force quick clean repeals of its festering guts. Emergency triage can facilitate change, with natural free-market selection driving activity. People will demand it, not fight it.

You should be able to buy insurance policies, period. Like products, because they are. Like you do for your car, or home, with options. If any laws are needed, they are repeals—of restrictions on your freedom to shop. That sort of protectionism has no place in this nation—it’s not a health-care thing.

Here’s a scenario. When the first few states finally bottom out, and people have zero coverage or options, a big-dog insurer or two will tell their agents, damn the torpedoes, sell policies. They’ll tell their government overlords, have your lawyers talk to our lawyers, see you in court, for the next decade. While they rake in billions providing excellent customer service.

Nothing real prevents insurers from offering juicy terms like pre-existing-condition coverage (for a price), stay on your parents’ plan (as long as you like, to any age, rates and conditions apply), low monthly rates (with high deductibles, your option). Poor people have poor-people options, not the working stiff’s teat.

Insurers all want your business, and will fight to get it, offering you everything from free large-screen TVs to the specific conditions that suit you. You might even do what my healthy friend Erica does (not her real name, she’s afraid to use it in this sorta free country). Pay doctors cash money for service. She gets excellent prices, top-of-the-line practice and the docs like her. A lot. No monthly fees at all.

When Obamacare goes away because it must, Republicans—and you—will finally realize the enormous win America just endured. Which state will be first? Tennessee is virtually there now apparently. Pinal County, Arizona, has hit zero providers. Next is the domino effect. Alt-left media like The New York Times, the TV networks, CNN and the rest will be embarrassed beyond recognition for lambasting the president for his “defeat.” They were defeated, but they’re such ideologues they don’t know it. Yet. The big question is if Trump is so sharp he planned it this way.