Chanel's Canary In The Mine Shaft

A.J. Rice
|
Posted: Mar 03, 2019 12:01 AM
Share   Tweet
The opinions expressed by columnists are their own and do not necessarily represent the views of Townhall.com. 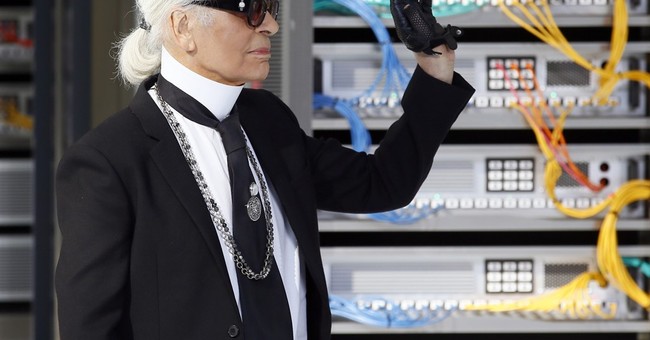 Usually in life, people play the role of spectator rather than actor. The crowd has a habit of swallowing the individual. But not so with revolutionary designer Karl Lagerfeld. He was mad, bad and dangerous to know, and we loved him for it.

If Andy Warhol and Donald Trump had a baby it might have been Karl Lagerfeld - he was half quotable avant garde artist, half unabashed champion of Western civilization and all 3 have incredible hair. He once quipped that "a sense of humor and a little lack of respect: that's what you need to make a legend survive."

Lagerfeld was born in Hamburg just as Hitler was seizing power in Germany. As a German, whom some have debated was of Jewish descent, he saw much as a young man that informed the rest of his life. Pain and failure create great art, just like it creates great capitalism. A world without creative destruction would be a world without Karl Lagerfeld. He was a force of nature.

Lagerfeld took over the House of Chanel in 1983, a dozen years after Coco Chanel’s death as the brand languished. At that point Chanel had been through as many wars as the seven kingdoms on Game of Thrones. She repeatedly battled her benefactors, the Jewish Wertheimer family, and after Hitler’s rise to power, may have collaborated with the Nazis. Decades of empire building followed the war, until Chanel died in 1971. Lagerfeld ascended to a damaged throne, but he in turn drove it to dominance in the world of high fashion.  Lagerfeld was never shy and did not hesitate to defend the freedom and life the Nazis of his home country would have taken from him.

The Syrian civil war played heavily on Germany’s past war guilt. Nazi Germany was of course the nation from which millions, including the Wertheimer family that laid Chanel’s foundations, fled. Millions of Syrians, dislodged by the violent civil war there between the fascist Assad regime and mostly Islamic fascists opposing him, flooded toward Europe.

But this refugee crisis could not have been more different than the World War II refugee crisis. That crisis was a true Exodus of Jews and others fleeing certain persecution, imprisonment and death at the hands of the unspeakably brutal Nazi regime. The refugees themselves were intellectuals, academics, business people, clergy and their families - all rooted in the Western traditions of open and fair elections, orderly and civil debate, and peaceful transfers of power. These were based on Europe’s Judeo-Christian foundational principals.

Syria might as well be millions of miles from Europe. An anti-Semitic fascist regime has ruled it for decades. Its Islamic fundamentalist culture has fostered an exodus of Christians and Jews from the Middle East. It’s no accident Syria’s ruling Ba’ath Party traces its roots back to Nazi Germany.

Lagerfeld knew all this. He also knew how Israel has begun to solve its Hamas problem - with a wall. When Syria’s refugees began flooding Europe, he saw the same threat the Nazis posed decades before. He saw a wave of young, military-aged men raised on hatred for people like him coming toward his home - people who either deny the Holocaust happened or think it was a fine idea. People who may be Ba’athists or Islamists - either way, they’re trouble for Europe, trouble for Christians and Jews, and trouble for LGBT people that populate the fashion world.

Merkel pledged to take in one million of them, evidently and ironically to assuage Germany’s war guilt. How importing people who hate Jews covers the guilt of murdering millions of Jews has never been explained.

Rather than panic or flee, Lagerfeld unleashed his acid wit. He slammed Merkel and threatened to renounce his German citizenship. He suggested that she was less a leader and more a dutiful pastor’s daughter, playing nice with people who would kill people like him.

History was on his side, but we don’t teach history properly in the West anymore so many reacted to Lagerfeld’s comments with revulsion. We teach only the supposed evils of the West, rotting our civilization with each succeeding generation. Western civilization is responsible for the modern world, its technology, its convenience, its tolerance, and the rights of women like Merkel to seek and win a powerful public office.

The West made Lagerfeld possible. With his signature white hair, black sunglasses, fingerless gloves, and high, starched, detachable collars he could have remained quiet, comfortable and looked the other way. But that was never his style.

In the twilight of life Lagerfeld saw Europe descending into madness again so he sounded the alarm. He was willing to take on anyone, including a morally confused German Chancellor. His final gift to us, his courageous attempt to preserve the greatness of the civilization that he contributed so much to, all while looking fabulous.