A.J. Rice
|
Posted: Sep 23, 2018 12:01 AM
Share   Tweet
The opinions expressed by columnists are their own and do not necessarily represent the views of Townhall.com. 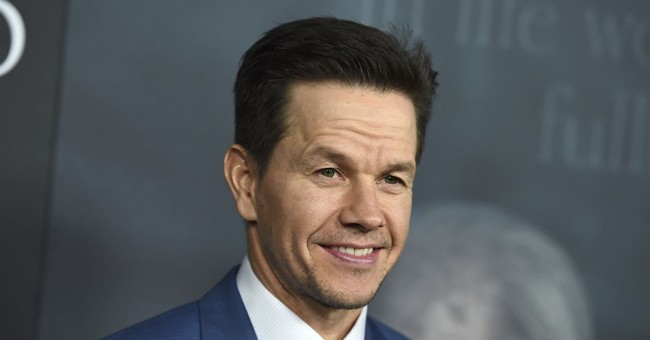 The Mark Wahlberg brand is one of the most untarnished in the entertainment industry. From big budget Transformer films, to raunchy cult classics like Ted.

It’s not hard to guess who’s on the Left in Hollywood - and on the field. Liberals make a habit of making an issue of their politics, especially in the Trump era.

But what about conservatives in Hollywood? There is obviously fewer - perhaps because they’re busy working instead of testifying and protesting. Or lying dormant awaiting discovery.

Or perhaps they’d prefer to let their work - and the way they live - speak for their values.

You could call this stealth conservatism. Or effective conservatism - since people tend to pay more attention to a good example than they do a loud mouth. Some may not even realize they are conservatives.

Is Mark Wahlberg one of these people?

The actor - who grew up poor in Boston and (along with his brothers) had become involved in petty and not-so-petty) crime by the time he was old enough drive - has supported and contributed money to the campaigns of other Democrat politicians - seems to be more instinctively conservative than even he may realize.

For openers, he’s as serious about his faith as he is about fitness. Wahlberg is a devout Catholic, active in the church. According to a BBC profile piece, his “day” begins at 2:30 am in the morning - not with preacher curls - but with half an hour of prayer.

“I pray to be a good servant to God, a father, a husband, a son, a friend, a brother and uncle, a good neighbor, a good leader to those who look up to me and a good follower to those that are serving God and doing the right thing.” He attributes his success - especially his turning his life around - to his faith, without which he says he’d probably still be on the streets. He credits a local parish priest, Father Jim Flavin, with helping him choose a different path than the one he was on as a teen.

Most people don’t know this about the 47-year-old actor and former rapper who's crew went by Marky Mark and the Funky Bunch.

And he’s not shy talking openly about his faith - something leftish celebrities almost never do. In a CNN interview with Piers Morgan, Wahlberg explained: “Once I focused on my faith, wonderful things started happening for me. And I don’t mean professionally - that’s not what it’s about.”

He described other actors “praying for their new movie to be a success or whatever and I’m like, ‘this is not what I come here for’ ... for me to sit down and ask for material things is ridiculous . . . I want to serve God and be a good human being and to make up for the mistakes I made and the pain I put people through. That’s what I’m praying for,” he told Morgan.

His comments are implicitly conservative - an acknowledgement that there is more to life than fame, fortune, and the limelight.

Wahlberg's schedule is also implicitly conservative. He gets up as early as he does - to pray and work out - in order to have time during the day to spend with his family. He and his wife, Rhea Durham, who were quietly married sans paparazzi at the Good Shepherd Catholic Church in Beverly Hills, have four kids together and Wahlberg - one of Hollywood’s highest-paid and busiest leading men - would never have time for them if he didn’t make the time.

Which is a very traditional attitude.

“By the time I’ve gotten up, worked out, done all my stuff . . . the kids are just waking up and my wife’s sleeping in so it works out good - but that’s one of the advantages of getting up early.”

Wahlberg also goes to bed early - 7:30 pm, according to the BBC article. Which is another pretty conservative thing to do. Something a lot of high-paid Hollywood leading men don’t do. You do see them out at 2:30 in the morning - doing something other than praying (or preacher curling).

Wahlberg also seems to be pretty conservative when it comes to picking the movies and shows he does. Examples include The Perfect Storm - which deals not just with overcoming adversity but accepting with equanimity adversity that cannot be overcome. A similar theme played out in another movie, Invincible - which is about Philadelphia Eagles walk-on Vince Papale - but is also in many ways a story about the actor’s own life and life struggles. He plays a laid-off substitute teacher who is having trouble providing for his family. His wife calls him a loser - and leaves him.

Instead of falling down, Papale - like Wahlberg - picks up the pieces and becomes a success, in spite of all the odds stacked against him.

This is a recurrent theme of Wahlberg's movies - and roles - as well as his life. Dealing with adversity, being strong, surviving and thriving. Like in Lone Survivor, a movie about SEALS in Afghanistan, where he plays American hero and noted Rick Perry supporter Marcus Luttrell. Then in PatriotsDay, a movie about a Boston cop who helps pursue the radical Islamist Tsarnaev brothers who bombed the Boston Marathon.

It's a pattern which indicates that while the actor may not be consciously conservative, he is actually conservative in his outlook on life and in his career choices - and even though he may not realize it openly, we can appreciate him all the same.