The Fog of War

Adm. James A. Lyons
|
Posted: Nov 17, 2018 12:01 AM
Share   Tweet
The opinions expressed by columnists are their own and do not necessarily represent the views of Townhall.com. 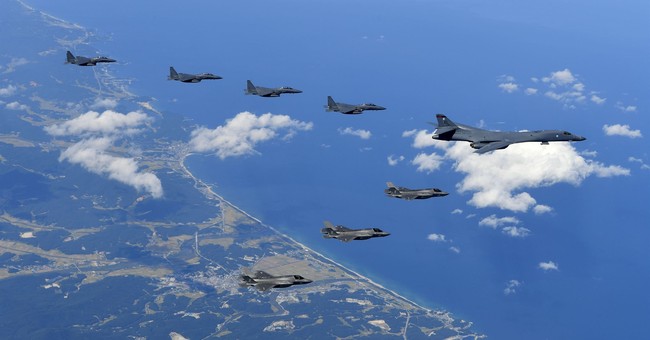 My op-ed on the thirty-fifth anniversary of the US Marine Beirut Barracks Bombing had generated a number of questions on the US Navy’s disastrous follow-on strike on 4 December, 1983 against two Syrian surface-to-air missile sites (SA-7) who were firing on our reconnaissance aircraft.  To set the record straight, here are the facts, but before I do, I want to express thanks to my many readers for the condolences sent on the untimely passing of my wife, Renee.  It was greatly appreciated.  Now to set the record straight.

The term “Fog of War” normally applies to a military operation that did not go according to plan, or there was a disastrous screw-up.  The Navy’s 4 December 1983 strike into Beirut qualifies as a prime example of a disastrous screw-up.  This operational disaster was used as a prime example of why the Goldwater-Nichols Act was required.  (The Navy wound up with an undeserved “Black Eye” because of the disastrous results of the strike.)  You will see how the Goldwater-Nichols Act misconceived the reason for the failure of the Navy strike and actually gave more authority to the Unified Commander and the Joint Staff, who were the prime cause for the failed strike.

After we failed to respond to the Iranian-sponsored terrorists that carried out the catastrophic bombing of the US Marine Barracks in Beirut 28 October 1983, killing 241 of our finest military personnel, we continued to conduct F-18/F-14 reconnaissance flights over Lebanon from our two offshore aircraft carriers.  These flights were constantly being fired on by two Syrian surface-to-air SA-7 missiles sites.  A decision was finally made by President Reagan to retaliate against those two Syrian SA-7 sites.

When the decision was announced by the Chairman of the Joint Chiefs of Staff, General Jack Vessey Jr., that we had been given a “green light” to strike those two Syrian sites, there was a combined cheer by every member of the JCS that we were finally going to do something.  This was going to be a surgical strike by two to four A-6 strike aircraft against those two SA-7 sites.  It would be over in a matter of minutes.

After announcing that we finally had authorization to carry out this retaliatory strike, General Vessey said to the members of the JCS, let’s let the CINC plan the strike.  The CINC being the Commander-in-Chief, US European Command, General Bernie Rogers, USA and his deputy, US Air Force General Dick Lawson, who was my old boss when I served in the Joint Staff as the Director, Political-Military Affairs.    As a former CINC, I can tell you this is exactly the type of order you want to receive.  Every member of the JCS were in total agreement.  When the meeting broke up, Lt. Gen. Mick Trainer, who was the US Marine Corps Operations Deputy, and myself (I was Navy’s Operations Deputy), were walking out of the “tank” behind the Chairman, General Vessey and Lt. Gen. Jack Merritt, the Director of the Joint Staff, when General Vessey casually turned to Merritt and said, “when I get down there, I’d like to know how the strike went.”  Vessey was leaving on a scheduled trip, I believe to Central America.  Nothing out of the ordinary with that request but keep it in mind.

At this point, the services had no further communications with the Joint Staff or the Unified Commander, US CINCEUR, on the authorized strike.  The services were not privy to any strike information such as a composite of the strike, weaponry, timing and other essential details.  This would have included how they would entice the Syrians to reveal their positions, etc.  No concern was expressed by the services over the lack of detailed strike information since the CINC was given total authority.

Unbeknown to the services, however, was the fact that instead of the authorized surgical strike on the two Syrian SA-7 sites, it was our understanding later that the CINC had developed a target set of 13 individual targets in the nooks and crannies in the hills and mountains behind Beirut.  Further, the conditions laid on the Sixth Fleet Carrier Strike Force Commander, CTF-60, Rear Admiral Jerry Tuttle, made it a very complicated operation.  These key conditions were:

Therefore, instead of a two to four plane surgical strike, it took the combined assets of two carrier strike groups to meet the strike criteria laid down by the Unified Commander.  Working ferociously, Admiral Tuttle and his staff finished the strike plan at 0330 in the morning Beirut Time 4 December, 1983, and put it out in a “Flash message” to the Unified Commander and his chain of command.  Tuttle’s strike plan called for an 1115 launch (local Beirut time) so that his strike aircraft would be over their targets when the sun was at its zenith.  That way our strike aircraft could stay above the triple AAA umbrella created by the gun emplacements and still visually identify the target.

One other aspect that cannot be overlooked is that Tuttle was required to keep a contingency strike force airborne throughout the night in order to be able to immediately respond to any evolving situation.  Keep in mind that this contingency force had to be recovered before Tuttle could launch his attack force against the 13 individual targets.

For the uninitiated, preparing a carrier flight deck for recovery of aircraft, then preparing it for the subsequent launch which includes fueling, breaking out and prepositioning weapons, plus a multitude of other tasks takes place with the precision akin to conducting a symphony orchestra.  Sequence with precision timing is everything.

Tuttle, totally exhausted, went to bed at 0330 am.  At 0500, Admiral Tuttle’s Marine Orderly woke him up and told him that we just received a message to execute the strike at “First Light.”  He was shocked! How could this be?  You can’t imagine the pandemonium that broke out.  The fine-tuned symphony orchestra was smashed.  Pilots had not received their final briefings.  No ammunition had been broken out.  Further, as you will recall, Tuttle had to recover the contingency strike force he was required to keep airborne.  Tuttle raced to Flag Plot and placed emergency calls to Commander Sixth Fleet, Vice Admiral Ed Martin (a former Vietnam POW) and to Deputy, US CINCEUR, General Dick Lawson, whose headquarters were in Stuttgart, West Germany.  Admiral Tuttle made repeated requests for a two-hour delay but was denied.  The Deputy CINC, General Dick Lawson was only allowed to authorize a 30-minute delay which will be later explained.

Of course, only a fraction of the strike force got airborne.  The strike was a total “disaster.”  We lost an A-6 strike aircraft.  The pilot was killed and his bombardier navigator was captured.  The Reagan administration was further embarrassed when they had to use the good offices of the Reverend Jesse Jackson, who was making a run for the presidency, to obtain the release of the POW.  There is no question the Navy was made to look totally incompetent!

However, before you jump on the bandwagon and condemn the Navy, remember what I previously told you about walking out of the “tank” behind the Chairman, General Jack Vessey, and the Director for the Joint Staff, Lt. Gen Jack Merritt, for the last meeting before the strike.  You will recall I mentioned the fact that Vessey turned to Merritt and casually asked, “Hey, when I get down there, I would like to know how the strike went?”  Years later, I took my good friend, General Dick Lawson to lunch in Washington, DC, and I said, “Dick I have a question that has bugged me for years.  As well as I know you, there is no question in my mind that you would have granted Tuttle his requested two-hour delay, why didn’t you grant it?”  He said, and I quote, “The Chairman’s Office would not let me!” Unbelievable!  The fog of war is coming into full play!

I told Dick Lawson about Vessey’s causal comment to Merritt.  I then said I am sure Merritt, being the perfect Army staff officer, got out his pen and paper and figured out that for him to be able to tell the Chairman how the strike went on his arrival, it had to be conducted at “first light.”  He said, “Oh my god, this is the only thing that makes sense.”

The Navy got an undeserved “Black Eye” and lost a young and promising pilot, Lt. Mark Lange, age 26, (USNA Class of 1979) and the services became saddled with the Goldwater-Nichols Act.  Jack Merritt received his promotion to being the Chairman’s NATO representative and received his fourth star to full General.  The Fog of War was in full play!