Adm. James A. Lyons
|
Posted: Oct 13, 2018 12:01 AM
Share   Tweet
The opinions expressed by columnists are their own and do not necessarily represent the views of Townhall.com. 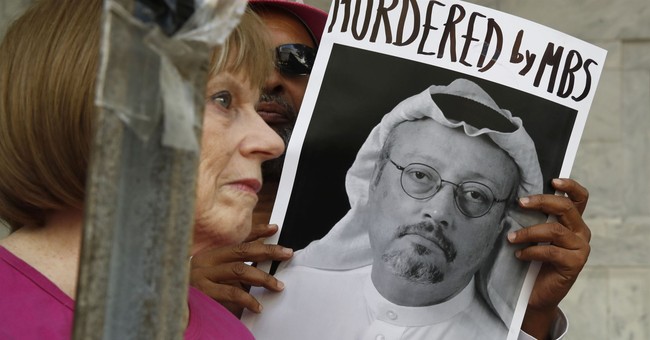 The missing Saudi journalist Jamal Khashoggi has caused world leaders to focus on not only the role Saudi Arabia may have played in his disappearance but also its role in the Yemeni civil war.  The missing Saudi journalist (a U.S. resident) is apparently the victim of a political assassination of the sort that occurs much too frequently throughout the Middle East and the world, e.g., Iran, Pakistan, Russia, China, et al.  No journalists should be subjected to threats of intimidation or threats on their life, much less murder for expressing political opposition.  Saudi Arabia must be required to make a full accounting for the disappearance of Khashoggi. Should the evidence show that Saudi individuals, perhaps even the Crown Prince Muhammad bin Salman, were responsible for Khashoggi’s disappearance and possible murder, they must pay a price imposed either by the Saudi government—or the U.S. government.

While we have many shared interests with Saudi Arabia, we do not have shared values in most cases.  In that sense, not only the treatment of journalists critical of the regime, but also the denial of women’s, minority, and non-Muslims’ rights as mandated by the Qur’an and shariah are prime examples.  Our primary shared interests clearly involve preventing the expansion and dominance of Iranian terror-linked influence throughout the Middle East.  Further, regime change in Tehran is also a vital shared interest both for U.S. national security interests and those of our Israeli ally and other partners in the region.

Never forget, Iran has been at war with the United States since 3 November 1979.  This Iranian regime is responsible for the loss of thousands of American civilian and military lives, from Beirut to New York City and the Pentagon, to the battlefields of Iraq.  Its key role in providing essential assistance and operational direction in the 9/11 terrorist attacks must never be forgotten.  Iran’s bid for control of Yemen through its backing of the Houthi rebels would give Iran direct access to threaten the strategic Bab al-Mandab strait where more than one-third of the world’s oil in transit passes through on a daily basis.  Along with its long-time threats to the Strait of Hormuz, such access would give Iran direct ability to threaten two of the world’s strategic straits and de facto ability to threaten a third, the Suez Canal.  Such a threat position cannot be allowed to happen.

With all the media hype about the disappearance of the Saudi journalist, Khashoggi, we must not lose sight of our larger objectives in the area.  In many civil wars, regrettably, there is always a humanitarian crisis.  Yemen is no different.  It’s what a civil war is about.  Houthi rebels backed by Iran have committed numerous atrocities, mainly unreported by the mainstream media (MSM).  Saudi Arabia’s indiscriminate airstrikes that have caused thousands of civilian casualties, however, are given primary attention.  There is no question Yemen is suffering a humanitarian crisis which must be resolved by a negotiated solution as soon as possible.  Taking back control of the port city of Hodeida is key to reaching such a settlement.  Such action would isolate the Houthi rebels in the south and keep them from their bases in the Yemeni highlands.  It would also facilitate the recapture of the capital city, Sanaa, and its airport.  Further, it would be a tremendous psychological blow to both the rebels and Iran.  It would be a major step in cutting off a key access point for Iranian support to the rebels.

Iran’s role in supporting the Houthi rebels is very transparent.  It is all part of a plan to expand the Iranian Shi’ite Crescent to where it becomes the dominant force in the Middle East.  They hope to accomplish this by physically surrounding the Arabian Peninsula with “proxy” forces supported with its own behind-the-scenes forces and material.  This classic Iranian tactic extends its geo-strategic reach and positions it to attack its arch-enemy, the Kingdom of Saudi Arabia, with the ultimate objective to seize control of the holy cities of Mecca and Medina.

Forcing Saudi Arabia’s withdrawal from the Yemeni civil war would only facilitate Iran’s hegemonic and terrorist objectives throughout the Middle East and beyond (Latin America), which include encircling the entire Arabian Peninsula with its oil and gas resources.  Preventing this strategic debacle from happening must be a top Trump administration-Saudi Arabia shared objective.  Resolving the disappearance of Jamal Khashoggi and ensuring appropriate punishment of those involved—even if at the top levels of the Saudi regime—nevertheless must be handled separately from maintaining our shared interests in eliminating the Iranian theocracy.  This is key!

James A. Lyons, U.S. Navy retired Admiral, was commander-in-chief of the U.S. Pacific Fleet and senior
U.S. military representative to the United Nations.