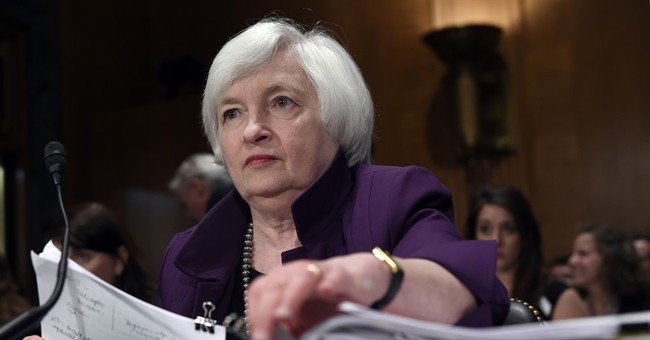 The Federal Reserve has a massive exit problem on its hands.

After the housing market collapsed in 2008, the Federal Reserve has engaged in a practice called quantitative easing, whereby it injected up to $85 billion a month into the economy to try to reduce unemployment and create jobs. The program ended back in October 2014, but interest rates have continued to stay low. As a result, the Federal Reserve now has an unprecedented $4.4 trillion on its books, and in doing so it may have sealed the country’s fate to face severe inflation in the future. Now, it will have to find a way to exit out of the mess it has created.

A Mess The Fed Created

Despite what you may hear, it was not the laissez-faire economy that caused the Great Depression. According to classical economists, it was in large part because the Fed kept interest rates artificially low, which overflowed the system with easy money and credit, and had to severely raise interest rates in order to curtail it. Between that and the fact that the Hawley-Smoot tariff was being debated in Congress at the time, investors reacted and thus began the Great Depression.

Similar instances have occurred more recently, most notably when the dot-com bubble burst and when the Great Recession hit. The reason for this is that with artificially low interest rates and easy money injected into the economy, people tend to spend beyond their means, and then end up defaulting and possibly even going bankrupt when interest rates rise due to inflationary concerns.

Is The Time Nigh?

Michael Marlow, professor of economics at California Polytechnic State University, compared the current scenario to when Paul Volcker was Fed chairman in 1979.

“They (the Fed) had to exit because interest rates were rising so quickly with inflation,” Marlow told Townhall. “This Fed hasn’t had that problem yet. This leads some of us to think that only when the market has said enough’s enough is when the Fed will back off and be compelled to exit.”

The market will signal that enough is enough when it feels like the Fed doesn’t have a handle on inflation, in which case interest rates would rise.

When looking at other instances of when the Fed has had to exit, the size of the monetary base wasn’t nearly as big as it is now. For example, the bursting of the dot-com bubble resulted in an eight-month long recession with long-lasting effects, including unemployment reaching as high as 6.3 percent in 2003. This graph shows that the money the Fed injected in the economy is a very small fraction of the amount it has injected into today’s economy:

This puts the Fed in what AEI fellow Stephen Oliner told Townhall was “unchartered territory.”

Determining the Extent of the Problem

It can be extrapolated, then, that it’s going to get ugly when the Fed has to exit. But how ugly exactly?

“When you have unconventional monetary policy, it is pretty darn difficult to make a prediction,” Marlow said. “When you assume that the Fed does nothing, and we go back to more normal conditions, then the Fed’s got a huge money supply problem. This is why it’s so difficult to make a forecast. Most people assume the Fed will do something, but we don’t know when.”

The best way to understand the extent of the exit problem, as Marlow teaches, is through the equation MV=PQ. This equation says that the money supply (M) and velocity of money (V) is equal to price (P) and GDP growth (Q). M is determined through multiplying the monetary base by the money multiplier, which is the amount of money that banks create with each dollar of reserves. Looking at data from the St. Louis Federal Reserve bank (commonly known as FRED) shows that the monetary base is vastly larger than the supply of money.

Currently, the Fed is holding approximately $2.5 trillion in excess reserves from banks. Given the sluggish economy and heavy tax and regulatory economic environment, the Fed provides banks with a low-risk option by paying them to hold onto their excess reserves. As a result, the banks aren’t lending, and that decreases the multiplier effect.

“Market interest rates are very low, so for that reason alone the temptation for banks to lend their reserves has been reduced,” Cato Institute senior fellow George Selgin told Townhall. “There’s a bit of a circulation issue here… because Fed expansionary policies themselves have contributed to low market interest rates and have thus contributed to the environment that made the banks inclined to accumulate new dollars that the Fed has created a perverse feedback loop.

“But, adding to that tendency is the fact that the Federal Reserve has been paying banks interest on their excess reserves since 2008,” he continued. “When you add to that the tremendous uncertainty about future policy changes and various red tape restrictions that complicate the bank lending system since the crisis—many of them stemming from Dodd-Frank—you have an environment that makes bank lending look like a poor substitute for banks just playing it safe and accumulating reserves.”

This has also been an impediment to economic growth.

“The lack of revival of that lending has been the most important reason for the sluggish recovery,” Selgin said.

Marlow noted that one strand of literature says the banks are afraid to lend because they have so much excess reserves.

“If the Fed doesn’t keep the rate of inflation down and doesn’t back off and go through this exiting, they’re going to be stuck holding the bag with a lot of worthless loans,” Marlow said.

Supporters of the Fed’s easy money policies believe that because inflation has been low, it shows that quantitative easing has worked. However, when loan demand increases, the bank will be incentivized to lend their excess reserves, either due to economic growth or when borrowers offer an interest rate that makes it attractive for banks to lend out again. This will cause the money multiplier to increase. If the Fed does not exit, the high monetary base will result into an unprecedented increase in the money supply. With about $2.5 trillion in excess reserves suddenly flooding the market, an inflationary spiral could occur.

“The danger of inflation arises not because interest rates are going up, but because the high interest rates may lead to a recovery in banks’ willingness to shed their excess reserves to take advantage of the opportunities,” Selgin said. “And at that point, if that goes too far, then of course you’ll have an excess supply of credit in the economy.”

The velocity of money has been on the decline since the Great Recession. However, the money velocity will increase when banks start lending again. Given the coming unprecedented size of the monetary base, even a slight increase in money velocity could cause severe inflation. Inflation wouldn’t be a concern if the economy was able to keep pace with inflation, because then wages and incomes would keep up with inflation so consumers wouldn’t be hurt by higher prices. But this is very unlikely to happen given the lack of GDP growth and the size of the monetary base. While it is difficult to determine the exact size of the exit problem due to the unpredictability of the Fed and economic instability, it can be inferred that inflation is very likely to occur.

As Marlow explained, there are a variety of dangers posed by inflation, including how it harms savers and incentivizes people to make bad spending decisions since consumers will want to spend their money before prices go up too quickly.

This is the future the country will likely face if the Fed is not able to exit properly. Unfortunately, the tools it has at its disposal will not allow the Fed to exit cleanly.

A Clean Exit Too Much To Ask

Traditionally, the Fed tightens monetary policy by selling off assets. But Selgin thinks that it’s going to be difficult for the Fed’s assets to be sold in large quantities.

“I’m afraid therefore that the Fed is going to be tempted… to instead rely on raising that interest rate that it pays banks to hold reserves in the event that bank lending should increase to the point that posed any inflationary threat,” he said. “So instead of reducing any actual dollar reserves in the economy and fending off inflation that way, as the Fed may have done in the past, it is proposing instead to use the interest payments on reserves as a way to encourage banks to do what they’ve been doing, which is not lending.”

A Glimmer of Hope?

However, Oliner thinks that the Fed can raise the federal funds rate without much trouble from the market if they give the market enough time to respond.

The Fed could also increase reserve requirements: the Fed currently requires the banks to set aside a certain amount of money in reserves so it has money available to consumers to lend to. If the Fed decides to increase reserve requirements, this would be the equivalent of seizing money from banks and would devastate the financial sector. There is simply no way for the Fed to exit this cleanly.

This is why Selgin suggests that one way the Fed will deal with inflation is that it will simply excuse the inflation.

“We’ve already heard many economists, not all of them Fed officials, say, ‘You know, 4 percent inflation might not be a bad thing,’ even 6 percent in the case of some pundits,” Selgin said.

Selgin thinks that there will be some short-term pain from the Fed exiting, but he does think that the Fed will avoid facing catastrophic levels of inflation, so long as another financial crisis doesn’t occur. Most likely, that we won’t see a robust economy for a while, which is what he thinks the country has to fear the most.

“A lot of people won’t call it a failure of monetary policy,” Selgen said. “They’ll just call it the new normal.”

Oliner also thinks that the Fed will be able to avoid inflation.

“I don’t think it’s very likely that all those excess reserves will burn a hole in the pockets of the banks that parked it at the Fed,” Oliner said. “If they decide to lend more, it will be fairly gradual and the Fed will be able to respond to that.”

Marlow is less optimistic about avoiding inflation, since the monetary base has expanded so much and that economic growth will not be able to keep it with it at its current pace.

In the Fed We (Do Not) Trust

The problem is that the Fed has become political, which has resulted in a lack of trust.

“The Fed has morphed into having a dual mandate, which the Congress has given the Fed,” Marlow said. “So they’ve got to have this mandate on keeping inflation low but at the same time trying to keep the rate of unemployment low. And now there’s this kind of behind-the-scenes political pressure for the Fed to work on income distribution.”

This leads Marlow to believe that the issue of inflation has been put on the backburner, but no one really knows. It would certainly explain why Chairwoman Janet Yellen continues to keep interest rates at near-zero levels.

The longer she waits to raise them, the worse the economy will be when the bubble bursts.

That’s why some suggest that the Fed should be abolished. Given its track record, and the current mess it has gotten into, it is certainly an appealing idea.