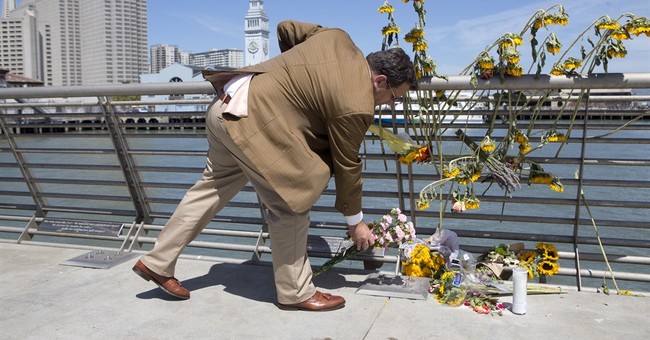 As has been reported in the news for the past week, San Francisco’s sanctuary city policy has come under fire after the horrific murder of Kathryn Steinle.

Steinle was walking along Pier 14, a popular tourist attraction in San Francisco with her father and a friend, when Juan Francisco Lopez-Sanchez shot her in cold blood. It goes without saying that all of us need to keep the Steinle family in our thoughts and prayers, as I can’t even begin to imagine the pain they are enduring right now.

But what is really disheartening about this incident is that it did not have to happen. Lopez-Sanchez is an illegal alien who was deported to Mexico five times, and yet he kept coming back. In fact, he specifically came back to San Francisco because of its sanctuary city policy- illegals can be harbored there without fear of being deported. You can thank Dianne Feinstein for that.

Naturally, the left is coming out in droves to defend the sanctuary city policy. CA Representative Xavier Becerra told The Hill that “someone dropped the ball.”

House Minority Leader Nancy Pelosi tried to use Steinle’s murder to promote gun control, which is ridiculous given that Lopez-Sanchez is an illegal, so no gun control measures would have stopped him from getting a gun. In fact, he supposedly got it from federal agent, which raises a whole other set of questions.

And then of course, Media Matters- the group that admits to promoting the Clintons, even though its 501(c)3 designation means its supposed to be nonpartisan- tried to laughably argue that sanctuary cities are perfectly legal. Which is obviously false.

All of these defenses of sanctuary cities don’t address one simple fact: if he hadn’t been allowed to stay, and if our borders were secure, Lopez-Sanchez would not have been in San Francisco and Steinle would still be alive today.

What Becerra and his ilk don’t understand is that sanctuary cities are constantly uncooperative with federal law enforcement. San Francisco was no different in Lopez-Sanchez’s case.

Immigration and Customs Enforcement was ready to release Lopez-Sanchez, and Sheriff Ross Mirkarimi actually requested that Lopez-Sanchez be transferred there since he had a marijuana charge on his record, which isn’t normally prosecuted in San Francisco.

When San Francisco released Lopez-Sanchez, as their legal division argued they had no basis to keep him detained, they did not let ICE know, despite ICE’s request. And ICE wanted Lopez-Sanchez deported.

So it’s clear then that ICE certainly does shoulder some blame for handing Lopez-Sanchez to San Francisco, but ultimately the responsibility belongs to the San Francisco sheriff and the city officials for letting him go and not have to worry about being deported under San Francisco’s sanctuary city policy.

This is not unusual for San Francisco- in 2008, illegal alien Edwin Ramos murdered Anthony Bologna and his sons Matthew and Michael. Again, Ramos benefitted from San Francisco’s sanctuary city policy.

Of course, it doesn’t help that the state and federal governments have allowed sanctuary cities like San Francisco to exist. There over 200 sanctuary cities in the country, including Los Angeles, San Jose and San Diego. Jerry Brown and the state legislature passed and signed into law the “Trust Act,” which put barriers on local law enforcement of cities that do not have the sanctuary city policy. And the Obama administration naturally has no problem with sanctuary cities.

It also doesn’t help that California has gone out of its way to give various incentives for illegals to come to the state, including generous welfare, driver’s licenses and licenses to practice law.

Take a look at the statistics- there are over 347,000 violent criminal immigrants on the loose in the U.S. Documents from Judicial Watch show that 121 illegal aliens released by ICE went on to commit homicide against American citizens, and almost three fourth’s of federal drug sentences are being served by illegals. Given these statistics, why would it make sense to have a sanctuary city?

Rep. Duncan Hunter has proposed a bill to cut off funding to sanctuary cities. Good. It’s a step in the right direction to end this dangerous policy and prevent senseless murders like Steinle’s.

This was originally posted on the East Bay Young Republicans website.

(Editor's Note: A previous version of the article stated that 121 million illegal aliens released by ICE went on to commit homicide, that figure has been corrected to 121 illegal aliens. We apologize for the error.)

Katie Pavlich
Why is an Election Denier Fundraising Off of False Accusations His Opponent is One?
Rebecca Downs