10,000 Reasons Pelosi Is to Blame for Security Failures on Jan. 6 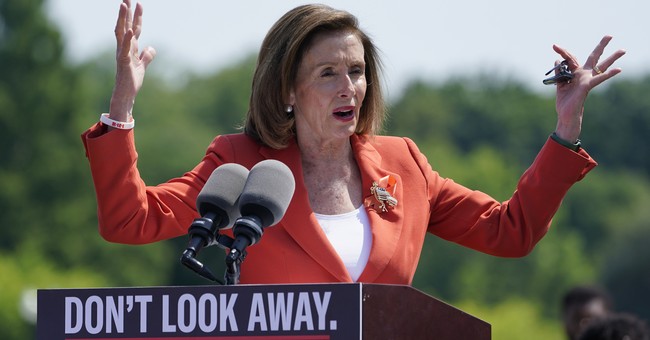 There are 10,000 reasons why Nancy Pelosi is singularly negligent in the U.S. Capitol’s comprehensive security failures on January 6th. Instead of addressing her willful negligence, she is pointing her finger at the person whose help she ignored, President Donald Trump.

The predictable hallmark of a left-wing coverup is to somehow find a way to scapegoat the 45th president of the United States, Donald Trump, for their own abysmal missteps and errors. The Democrats’ twisted creativity in pursuing this anomaly is truly something to behold.

The mainstream media fallout from January 6th was a godsend to Democrats who found themselves on the heels of the disproven Russia Hoax, a spectacularly underwhelming performance by Robert Mueller, two failed impeachments, and no significant policy achievements during their tenure in the majority.

At that point, their win record was abysmal at best. As America suffers from Democrats and their failures, the Left pounced on January 6th in a desperate attempt to distract the country from their own incompetence.

But the facts weren’t out about that day. Many remain undiscovered. And today, to the annoyance of hysterical Democrats hellbent on advancing their theatrical narrative about January 6th, Republicans are raising one looming question that remains overtly (and purposefully) ignored by the Democrats’ Partisan Witch-hunt Committee:

Why did Nancy Pelosi fail to properly protect the Capitol while President Trump, on January 4th, requested 10,000 National Guard Troops be available to provide security to Americans and the United States Capitol on January 6th?

The Left would very much like for you to ignore this question. Its answer fundamentally undermines the January 6th Partisan Witch-hunt Committee’s highly-crafted and theatrically-based storyline about President Trump’s involvement in the events of that day—a theory that was completely rejected by an FBI investigation. If you were planning on “inciting an insurrection,” “trying to overthrow the Republic,” or “subverting the democratic process,” you wouldn’t have asked for 10,000 National Guard troops to protect the institution you were trying to overthrow!

What does Pelosi know? And why won’t she testify?

The simple fact is, Nancy Pelosi’s failures on January 6th exposed the U.S. Capitol’s vulnerabilities during the certification (and constitutionally-valid objection process) of the 2020 presidential election – one that has been used by Democrats for years and years. Now she’s blaming President Trump for her egregious incompetence and dragging the country along with her through dramatic nationally-televised smokescreen hearings.

Pelosi’s blunders were not anomalies in her leadership, her errors were systemic. A secret after-action analysis by the Capitol Police identified “fifty-three areas of failure” in Capitol security under Nancy Pelosi’s management.

Do you think Adam Kinzinger, Liz Cheney, or other members of the committee will raise these issues during their upcoming partisan sham hearings? Don’t hold your breath.

Nancy Pelosi could learn from President Trump. On January 4th, Trump requested National Guard troops provide security ahead of the rally. He called for peaceful, patriotic free speech in the spirit of the First Amendment. He denounced any form of political violence, encouraged voters to demand election integrity from their elected officials, and asked that Americans “make their voices heard” in accordance with our Constitution and Bill of Rights.

President Trump called for law-and-order while Nancy Pelosi continued to flaw and blunder.

The events of January 6th never would have happened had Nancy Pelosi worked with President Trump to fulfill his request for 10,000 National Guard troops. There is no logical reason why augmented security at the U.S. Capitol during one of the republic’s most solemn and consequential procedures should be controversial.

Partisan vitriol will spew from the unselect committee over the summer as they desperately try to distract the American people from the substantive and significant crises facing our nation. There may never be a fair and balanced investigation of January 6th because the pursuit of truth is politically disadvantageous to the committee and the Democrat agenda.

Pelosi herself pontificated on Twitter that “a weak person and a poor leader takes no responsibility and blames others.” Surely, she must believe that sentiment applies to whoever was responsible for maintaining Capitol security on January 6th.

Who’s going to tell her?