Gov. Ducey Has Harmed the Republican Party's Cause 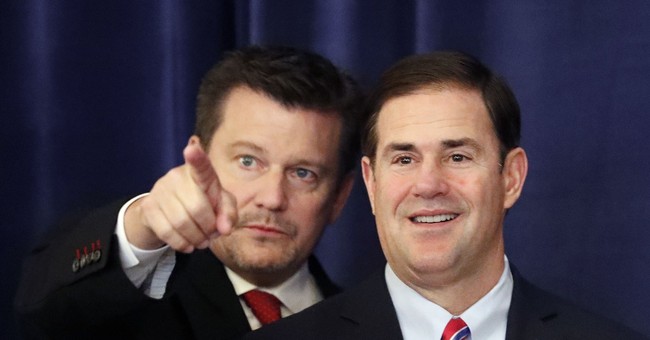 Ronald Reagan famously said that the 11th Commandment was, “Thou shalt not criticize a fellow Republican.” Republicans, being more independent thinkers than our opponents, often assemble in circular firing squads to the detriment of the greater good.

I recently criticized Republican Governor Doug Ducey for abusing his authority. While most of my correspondents regarding my opinion piece agreed, some have not. I’m okay with that.

I believe that Governor Ducey has harmed the common cause of the Republican Party. In what appears to be a petty move, during a field hearing with witnesses and President Trump’s attorneys presenting evidence to substantiate the questions surrounding the 2020 presidential election, Governor Ducey decided that it was a good look to certify the election.

By doing it at the same time as the hearing, the governor put a finger in the eye of the president and Republicans, almost as if he wanted to distract from the hearing. It was as obvious as a person ignoring a ringing phone, that Governor Ducey was uninterested in the evidence presented by witnesses and the president’s representatives.

It indicates pretty strongly that Governor Ducey has left the Reagan Republican Ranch.

Some of my new friends who have written their delightful missives have inquired why I didn’t simply express my concerns in a one-on-one, off the record discussion with the governor. That is my normal approach. But, with this governor it would be truly novel.

When I reach out to this governor, I am shunted to his Chief of Staff. His chief is a pleasant-enough person, but it isn’t a peer-to-peer communication channel.

When I reach out to the president of the United States, whatever time-24/7- I know that I will receive a call back from the most powerful leader in the world. In fact, he will call me from time to time to discuss important issues. It is easier for me to talk to President Trump than Governor Ducey. And, it has been that way for four years.

When the governor chose to certify Arizona’s election, smack dab in the middle of a hearing where evidence was presented questioning the integrity of the 2020 election, perhaps the governor should have taken the president’s call.

Questions about election integrity raise concerns about the most fundamental institution of a representative republic—the franchise.

I appreciate the defense of Arizona’s election by state and county officials. The thing is we all want to have confidence in our elections.

The governor would have come off like a champ had he brought the Legislature in for a special session in order to proceed with a full-scale, forensic audit to determine the veracity of the presidential election.

First, if the audit proved that the election was pristine and without flaw, it would have substantiated the Governor and other’s claims. He would be able to say to the world, “See, it was a great election.

On the flip side, if any flaws, anomalies, or even fraud were discovered the governor would be a champ by rooting out an unjust, untrue election. Wouldn’t that be great?

By preventing the audit, the governor doesn’t win any friends and allows the questions surrounding the election to remain under a cloud of skepticism. And, I suspect that even President Reagan would have been inclined to violate the 11th commandment and joined in the criticism of Governor Ducey.