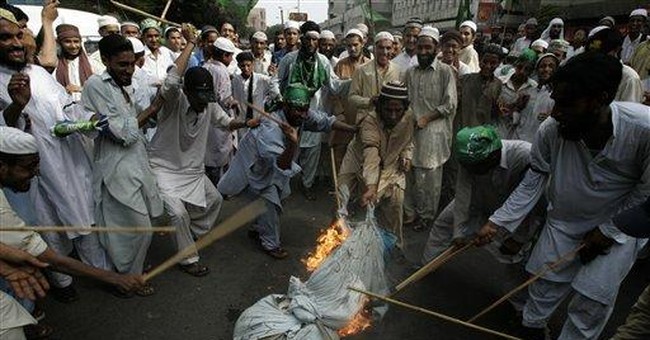 COPENHAGEN, Denmark -- I am being patted down by a female Danish security officer in the basement of the parliament building in Copenhagen and I have a thought. I have just triggered the metal detector -- my heels, I'm sure -- en route upstairs to the Landstingssalen, formerly the parliament's upper house. There, I am scheduled to deliver a speech at the invitation of the Danish Free Press Society, or Trykkefrihedsselskabet. (Say that three times fast -- or slow.)

Indeed, I am holding the text of my 20-minute address inside a folder in one of my hands, now rigidly outstretched as I am being searched. The speech is called "The Impact of Islam on Free Speech in the U.S.," but as I am checked for bombs and knives and whatnot, my thought is of the impact of Islam on free society everywhere.

Such a thought surely tops the heights of "political incorrectness," I know. But what should I do -- not express it? Not think it? Not even notice that Western civilization, in skewing to accommodate the jihad threat of Islam within, has already traded away too much precious freedom?

As the security officer continues patting me down, I follow this forbidden train of thought to the realization that it is only due to the incursions of Islam into the West -- Islam with its death penalty for criticism of Islam -- that I am now standing here under guard. Here we are (for there is a long line behind me by now), participants in a conference to consider Islam's censoring impact on free speech, and Danish security is doing its best to prevent Islam from censoring the speech of anyone here permanently. This strikes me as an exceedingly hard way to prove a point.

Not that there are many people likely to try outside the elegant, security-ringed conference room upstairs. In PC lingo, security in the basement is looking for "terrorists" or "extremists" -- those postmodern designations for perpetrators of Islamic jihad that, presto, turn everything Islamic into something generic. Still, with Islam comes jihad, and with jihad comes Islamic law (Sharia), no matter what "experts" tell you. And because Islam is a growing presence in the West, Western countries must now and presumably forever expend vast sums of money and manpower to manage -- not defeat, just manage -- the jihad that can break out in acts large and small at any time. Increasingly, this also means deferring to Sharia.

Finally, my pre-conference frisk is over. Hallelujah, I am no threat to society and allowed to pass. I go on to meet for the first time the great author Wafa Sultan, and meet again the great Dutch parliamentarian Geert Wilders, the two most illustrious speakers on the conference roster.

Both Sultan and Wilders, of course, live under unrelenting, permanent and Islamic threat of death for their critiques of Islam, in a very real way suffering every day for defying Sharia's prohibition against criticizing Islam. But does the outrageousness of their plight resonate with their fellow citizens? I don't think so. I think we've all grown much too used to it, and dully complacent. But imagine if I had written, circa 1970, that for his critique of communism, Ronald Reagan lived under unrelenting, permanent and communist threat of death in his beloved California, that he couldn't travel the streets of Los Angeles without a massive security retinue, that he could no longer even sleep in his own home. Wouldn't Americans have become rightly agitated over the communist enemy within?

I think the answer would have been yes, but the point is, no such mortal homeland danger existed at that time for those who spoke against the leading threat to Western-style liberty. Today, a mortal homeland danger does exist. I won't tell you what it was like to slip in and out of the Wilders security bubble during the course of his stay in Copenhagen, but suffice it to say, it is both a veritable shame and an outrage that his life depends on that bubble, and that for speaking his mind in defense of Western-style liberty he has lost his own freedom.

The same goes for Wafa Sultan, who, for attacking the repressiveness of Islamic law (under which she existed for 30 years in Syria), also lives privately a similarly wary, hunted life that necessitates protective security measures.

Remember, this is happening in the "Free World." Whether in Denmark, Holland or the United States, the heavy hand of Islamic law is pressing in on its leading critics, squeezing the freedom out of their existence. It is time to say enough -- literally enough, for example, and stop Sharia by stopping Islamic immigration -- and throw off the rising chokehold of jihad-advanced Sharia. I guarantee it will take a lot more effort than just patting down the occasional free speechnik, but I also guarantee that for the sake of free speech it is worth it.