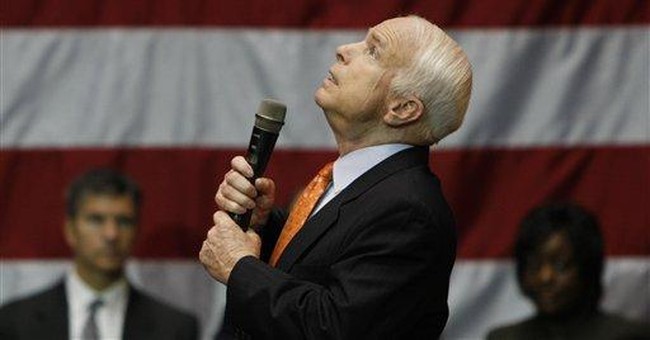 When it comes to national security, Democrats are serving up softballs for John McCain. But he better be getting a lot of batting practice so he can knock it out of the park once the general-election campaign gets in full swing.

Democrats downplay the scope of terrorist threat and constantly obstruct our efforts to pursue this "overblown" enemy.

Having run out of all other excuses to oppose extending the bill that permits warrantless monitoring of international conversations between terrorists, they have settled on the specious argument that the private telecoms don't deserve immunity from frivolous lawsuits commandeered by the trial bar.

It doesn't matter to Democrats that these companies patriotically responded to the president's call to assist with surveillance and relied on his assurances that they would be acting legally. What matters is that trial lawyers are among the biggest contributors to the Democratic Party -- the party that supposedly eschews special-interest politics. The trial bar must be paid back whenever possible, even if it means telecoms will not cooperate in the future for fear of stepping into a malicious litigation trap.

Democrats say they'd allow the legislation to pass if Republicans would agree to sever the immunity provisions from the bill for later treatment. But everyone knows -- except voters the Democrats are trying to dupe -- that if you carve out that portion of the bill, Democrats will try to prevent it from ever coming to the floor.

Democrats duplicitously claim the GOP just wants to protect another group of evil corporations. But can they point to one real victim who the telecoms have abused while assisting the government in saving American lives? Can they point to a real motive the telecoms would have in harming such nonexistent victims? Enough is enough.

Also, Democrats passed a bill -- which the president then vetoed -- to prohibit the United States from performing any interrogation techniques not described in the Army Field Manual. National Review Online's editors praised the president's veto, pointing to the recklessness of this bill because it would telegraph to the enemy all available interrogation techniques and enable the enemy to train to resist those methods.

Even on Iraq, Democrats have a losing position if Republicans will just make their case. First, McCain can point to the success of the surge and his early support for it. If Obama and other Democrats had gotten their way, we might be well on our way to losing in Iraq.

But Democrats say we should never have attacked and that al-Qaeda wouldn't be there if we hadn't. We should have finished the job in Afghanistan, they say, because that's where al-Qaeda trained to attack us on 9/11.

But has anyone ever challenged the Democrats on the absurdity of this position? If we were justified in attacking al-Qaeda in Afghanistan because they trained there to attack us, then why aren't we justified in fighting them in Iraq since they are attacking us there?

Besides, we have the right and duty to attack them wherever they are. They are the enemy.

A strong case has been made that al-Qaeda's presence in Iraq preceded our attack. But irrespective of that, they attacked us and provoked sectarian violence there in furtherance of their own evil purposes.

Whether we had a right to attack Iraq, which we did for a multitude of reasons already exhaustively discussed, is a completely separate question from whether we have a right to fight al-Qaeda there.

The Democrats' untenable position is that since we didn't find stockpiles of WMD in Iraq, we have no business fighting or defeating al-Qaeda there. They conveniently ignore that we had removed Saddam Hussein from power and were trying to establish order when al-Qaeda joined with Iraqi insurgents to prevent that from occurring. Democrats need to get this through their heads: Al-Qaeda is the aggressor in Iraq, not the United States.

Democrats pretend that if we will just withdraw from Iraq, al-Qaeda will forgive us and leave us alone. They will never leave us alone as long as they are capable of fighting us, no matter when we leave. But if we do leave before completing the job, al-Qaeda will be emboldened and become an even fiercer enemy, which will increase Middle East instability and invite further attacks against our interests abroad and at home.

I don't care how charismatic, nice, eloquent or brilliant Obama is. If he were to pursue precipitous withdrawal and the other terrorist-friendly policies he and Democrats support, our national security will be exponentially imperiled. It's time for Republicans to quit being on the defensive on these issues and take this fight to the public.