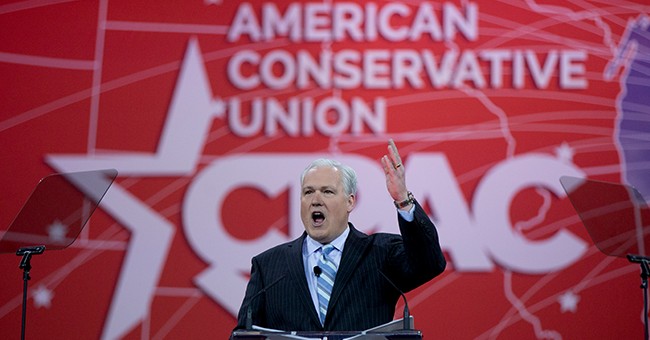 Matthew Aaron "Matt" Schlapp, American Conservative Union Chairman, and outspoken supporter of President Trump is considering a potential run for the U.S. Senate in Kansas in 2020 and take the soon to be vacant seat of longtime Senator Pat Roberts. Schlapp, a native to Wichita, Kansas is also currently a lobbyist and owner of Cove Strategies, a D.C. based lobbying firm.

Schalpp has also been the longtime face of the prominent and powerful advacacy group, The American Conservative Union which hosts the annual conference for grassroots conservatives called the Conservative Political Action Conference (CPAC). The conference hosts GOP heavyweights each year including this past year President Trump along with Townhall's own Katie Pavlich.

Early in his career, Schlapp served as campaign manager and chief of staff to Representative Todd Tiahrt, a longtime representative of Kansas, and more recently as the deputy assistant to President George W. Bush.

Townhall has verified with a source that the source familiar with the matter confirmed the potential run late Friday afternoon.

Schlapp, a frequent cable news personality, is notorious for responding to Twitter critics by "Schlapping" them back with witty or factual statements.

If elected, Schlapp would fill Senator Pat Roberts seat who announced earlier today that he will not be seeking reelection in 2020. The 82 year old senator from Kansas has served since 1997. The longterm senator is most known for his advocacy work, while in the U.S. Senate, for the nation’s farmers and agriculture industry.

All I have to say is any political opponent better be fearful of going against Schlapp. Schlapp's candor, experience, and name ID across the country should not be underscored. Any opponents of Schlapp would have a better chance of keeping ice from melting in hell then beating the ACU Chairman in his own state of Kansas.  #FearTheBeard

.@SenPatRoberts has served the state of Kansas w honor and distinction. I have looked up to him for decades and will miss his humor, optimism and common sense in Congress. Senator Roberts took his job seriously but never took Washington too seriously.