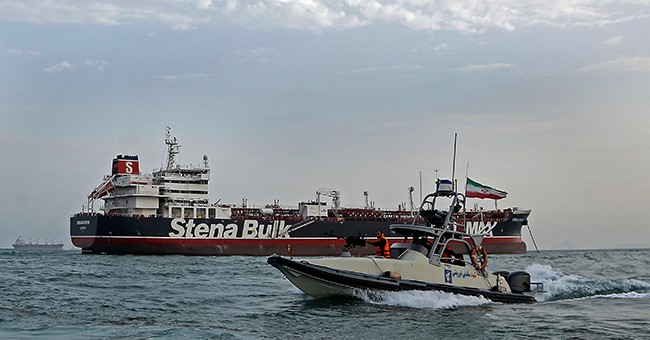 When Britain seized an Iranian tanker for violating sanctions, Iran thought it could pressure Westminster for its release by seizing a British-flagged tanker as a hostage. Britain did in fact release the Iranian tanker Thursday — despite a last-minute request from the United States to gain custody over the ship.

An Iranian official said on Tuesday that the Iranian tanker Grace 1 — which Britain seized off the coast of Gibraltar last month — would soon be released, a notion that British authorities at the time neither confirmed nor denied. But 48 hours later, Gibraltar's local government revealed that the United States has applied to gain custody over Grace 1, complicating Iranian plans to secure its prompt release, The New York Times reported.

It is unclear which legal basis the United States cited to ask for Grace 1, but it could be related to U.S. sanctions placed on Iran that aims to restrict its ability to export oil by inflicting severe economic penalties on countries that continue to import the resource from the middle eastern country.

The U.S. request, however, did not go through. The Gibraltar authorities today formally released Grace 1.

It is unknown whether Iran will now release from captivity the British-flagged ship Stena Impero; however, Iran's president has previously proposed a quid pro quo, where the Stena Impero would be released if Britain does the same with the Iranian ship in its captivity.

The Britain-Iran spat started on July 4, when British marines and Gibraltar officials seized the Iranian tanker near Gibrantar's waters for illegally shipping oil to Syria, in defiance of E.U. sanctions. Iran quickly denounced the seizure, and within a few weeks, seized the Stena Impero in the Strait of Hormuz.

Jeremy Hunt, who was Britain's foreign secretary when the Stena Impero was captured, and Dominic Raab, his current successor, have both rejected the Iranian offer of a quid pro quo, saying they will respect whatever legal decision Gibraltar's local government arrives at.

As for The Rock's local government, it said that it hoped to "de-escalate issues arising since the lawful detention of Grace 1," releasing the crew members of the tanker on Tuesday. Gibraltar government was also expected to let the seizure warrant on the captured ship elapse this coming Sunday, according to the New York Times. Once the warrant expired, the ship would have been free to go.

But at a court hearing on Thursday, Gibraltar officials revealed the U.S. request for custody over the ship, and the hearing was adjourned until later in the day.

“The U.S. Department of Justice has applied to seize the Grace 1 on a number of allegations which are now being considered,” the Gibraltar government said in a brief statement, according to The New York Times. “The matter will return to the Supreme Court of Gibraltar at 4 p.m. today.”

Gibraltar's government, however, decided to release Grace 1 when it received "written assurances" from Iran that the tanker will not sell oil to Syria. The New York Times reported that Iranian oil traders told them the ship will now stop by Greece and Italy, although it is unclear who will buy oil from Iran and risk U.S. secondary sanctions.

In the last month, Iran has also claimed to have seized a U.A.E.-based ship and an Iraqi oil tanker; non-Iranian sources have confirmed only the seizure of the former ship. Iran has also been accused of attacking and damaging several oil tankers passing through the Strait of Hormuz, accusations that Iran categorically denies.

The U.S. request came at a transition period for Britain as the country steers away from the European Union to seek closer ties with the United States.

With the Brexit deadline looming on October 31, Britain is looking to seal trade deals quickly with the United States to cushion its economy from the adverse impacts of leaving the common market. National Security Advisor John Bolton said that Britain is at the "front of the queue" for any trade deal with the United States, suggesting that the two countries could perhaps sign a series of smaller, "sector-by-sector" deals before Brexit. House Majority Leader Nancy Pelosi has, however, come out against any U.S.-British trade deal unless Britain avoids a "hard border" between Northern Ireland and the Republic of Ireland.

Some analysts have speculated that the United States might make some tough demands to Britain in exchange for a trade deal, including on key issues like Iran. Britain has already abandoned a Europe-led maritime mission to patrol the Strait of Hormuz — an initiative of its own creation — in favor of joining a similar, American-led patrol operation to escort oil tankers through the threatening waters.

Meanwhile, Iran has continued to double down in its showdown with Western powers over the fate of the Iran Nuclear Deal, which has been on the balance since the United States withdrew from it in 2018, slapping on progressively severe sanctions since then. In response, Iran has broken several restrictions placed on its nuclear program by the Iran Nuclear Deal, enriching more and higher-grade uranium.

The country has threatened to break even more restrictions unless the Europeans compensate for the economic impact of the U.S. sanctions with economic incentives of their own, but multiple meetings between Europeans and Iranians have yet to bear fruit.