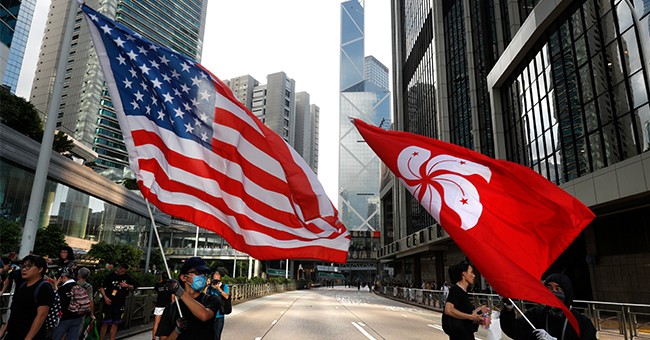 In Hong Kong, a few protesters are rallying to a flag — the American flag.

Since starting their demonstrations seven weeks ago against a controversial extradition bill that threatened to undermine the city-state’s democracy, the protesters in Hong Kong have raised many different flags to represent their cause. Often times those are variants of the flag of the city-state — a stylized, white five-petal flower from the Hong Kong orchid tree on a red background. One commonly used variant is the same flag but with wilted petals behind a black background, threatening imagery of democracy under attack.

But on rare occasions, the protesters raised the Star-Spangled Banner while marching through the streets of Hong Kong.

i spoke to some of the hong kong protesters waving american flags. (they are a very, very small minority, ignored by most protesters, but nonetheless get a lot of attention from the media.) pic.twitter.com/NstLabMwWP

The Hongkongers are raising the Stars-and-Stripes to appeal to the United States to take action, according to a few of the flag-carriers.

One person carrying the U.S. flag interviewed by Asia Times noted that he wants to "urge the U.S. Congress to pass the Hong Kong Human Rights and Democracy Act as soon as possible." The proposed legislation, if passed, will impose sanctions on individuals from the mainland and the city-state who violated human rights and require the U.S. government to annually review whether Hong Kong is democratic enough to merit lucrative U.S. trade privileges not afforded to the rest of China.

Another flag-holder interviewed by Wilfred Chen, a twitter user who claims to have been at a protest site, had a different response.

The protester allegedly said he wants to wave the U.S. flag — an act sure to infuriate the Chinese government already irritated by the protracted demonstration in Hong Kong — to invite a Chinese military crackdown that will hopefully provoke the United States into taking more concrete action.

Some people are concerned that waving the U.S. flag will provide ammunition for Chinese claims — made without evidence — that the Hong Kong protests are not an organic people's uprising but a sinister plot engineered by Western powers to undermine China.

The spokesperson for China's foreign minister has already claimed that she sees "clear signs of foreign manipulation" in the demonstrations.

"I hope the US will answer this question honestly and clearly: what role did the US play in the recent incidents in Hong Kong and what is your purpose behind it?" the Hua Chunying, the spokesperson, said. "We advise the US to withdraw its dirty hands from Hong Kong as soon as possible."

However, protesters on the ground denied that they are related to the U.S. government.

“I’m just expressing myself, I’m not paid by anyone. The Chinese government wants to attribute [protests] to foreigners, not to Hong Kong people,” the same protester told Asia Times.

Protesters have also rallied to flags associated with Britain, whether it be flags of the colonial government in Hong Kong or the Union Jack. Britain held Hong Kong as a colonial possession until it turned it over to China in 1997.

“I miss the British-Hong Kong government before 1997. The British helped us build a lot of things: separation of powers, our rule of law, our entire social system,” said Alexandra Wong, 63, a protester who’s often seen raising the Union Jack at demonstrations, Japan Times reported.

In response to the protests, Britain has repeatedly called on China to abide by the terms of the city-state's handover and protect the human rights and liberties granted to Hongkongers. China has responded by demanding Britain to keep its "hands off and show respect."

“We stand behind the people of Hong Kong in defense of the freedoms that we negotiated for them when we agreed to the handover in 1997 and we can remind everyone that we expect all countries to honor their international obligations,” Jeremy Hunt, then-foreign secretary of the British government, told Reuters on July 2.