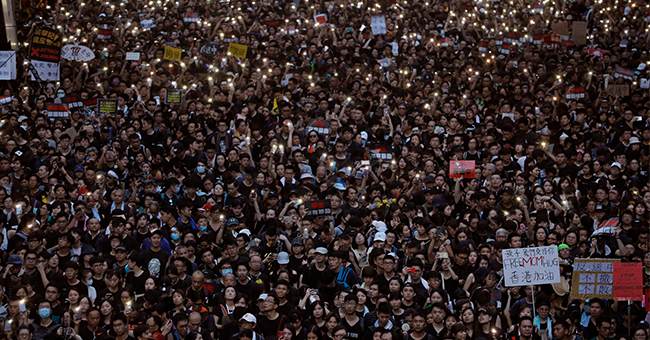 On Tuesday, Hong Kongers scaled back political efforts after a week-straight of mass demonstrations demanding the withdrawal of a controversial extradition bill and the resignation of Hong Kong's chief executive, Carrie Lam. In response to these protests, Hong Kong authorities temporarily suspended the bill, but Lam has yet to step down from her post.

Lam apologized for the turmoil in a Tuesday press conference, but offered limited concessions to the protesters beyond reiterating her Saturday decision to suspend consideration for the extradition bill. The bill would have allowed the city government to extradite Hong Kongers to mainland China, where the court system is often politicized and unaccountable.

Lam also clearly ignored protestors' other key demand that she step down for her post.

“After this incident, I think work in the next three years will be very difficult...but myself and my team will work harder to rebuild public confidence,” she said according to Reuters.

Despite not ousting Lam, Hong Kongers, with their most immediate goal of temporarily stopping the extradition bill achieved, are quieting down protests

In the last week, Hong Kongers occupied the city-state’s main roads and government plaza, shutting down the government for six days. Today, protesters largely vacated the area after the public demonstration climaxed over the weekend, The South China Morning Post reported.

“I think it’s a reasonable decision for most of us to leave,” said Kabe Lam, a 16-years-old protester. “We should get some rest and come back when something happens.”

These protesters garnered international allies as well. Citizens in “Britain, Germany, France, South Korea, Australia, and North America, among others,” ramped up support for the plight of Hong Kongers through solidarity protests during the week-long demonstration, according to Asia One.

This past week, roughly 1,000 people crossed the Manhattan Bridge in New York City to show their support for the Hong Kongers. Meanwhile, in Washington D.C., approximately 30 people showed up at the Victims of Communism Memorial, a replica of the Goddess of Democracy statue erected by student protesters in the 1989 Tiananmen Square protests.

Standing before a replica of the Goddess of Democracy that rises above a pile of mourning wreaths, the demonstrators, including foreigners joining in support, chanted slogans demanding the full withdrawal of the bill, Lam's resignation, the release of detained protesters, and called for the Hong Kong government to revoke its labelling of Wednesday's protests as a riot.

Many demonstrators were clad in black T-shirts, and some wore face masks, in protest against the firing of tear gas and rubber bullets on young demonstrators surrounding the city's legislature by the Hong Kong police, which injured around 80 people.

In the United States, several politicians across the political spectrum praised the protesters and denounced the extradition bill:

I want to express my admiration for the people of Hong Kong and their strong but peaceful response to this proposed encroachment on their autonomy. I’m glad to see their leaders respect their willingness to stand their ground.

We are so often disappointed at the outcome when the voices of freedom confront authoritarianism. That is why news that #HongKong has indefinitely suspended #China extradition bill is so uplifting.

"I wish we were doing more to promote our values. I did agree with Secretary Pompeo’s comment on China and Hong Kong. But I don’t see that we’re doing as much of that as I would like us to," said @SpeakerPelosi at CFR.