As Hong Kong Protests, China Lives in a Fantasy World Where It’s All An American Conspiracy 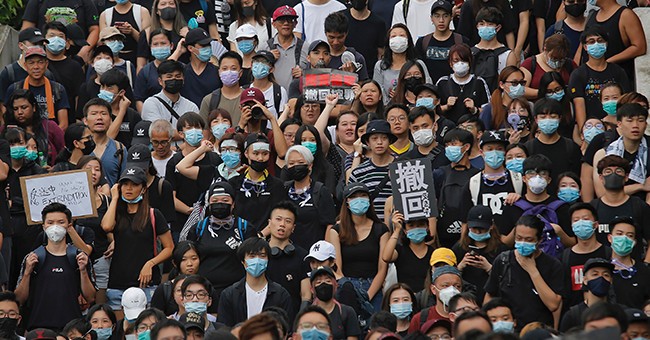 This weekend, in true David versus Goliath fashion, Hong Kongers achieved the impossible: after they flooded the city’s streets for more than a week, the local government suspended consideration of an extradition bill that would have undermined the city’s judicial independence.

Too bad you wouldn’t really know any of that if you only read Chinese state media.

China Daily, the Chinese Communist Party’s propaganda paper, did not bother to cover the anti-government protest in the city that weekend, which happened to be attended by roughly two million protesters — a quarter of Hong Kong’s population.

Instead, the propaganda organ chose to cover on Monday a poorly attended march by Hong Kong’s parents “urging the U.S. government to keep their hands off” of Hong Kong’s internal politics.

I don't need The Onion.
I have China Daily. https://t.co/gDYuG8Br4x

A whopping 30 people took part in that parents’ march held on Sunday, by China Daily’s own accounts in their article, an excerpt of which follows. Despite the widespread and persistent protests in Hong Kong's street, the Chinese Communist Party is eager to inform you that it's all a drummed-up U.S. conspiracy that is creating undue disruption:

It is despicable that the US officials had frequently intervened in the issue of amending the extradition law, said Stanley Ng Chau-pei, member of the alliance.

The foreign forces, colluding with some anti-rendition members of the Hong Kong opposition camp, also incited the city’s young people to participate in unlawful assembly, which turned into violent clashes and riot, said Ng, also a Hong Kong deputy to the National People’s Congress.

Ng said parents in the city felt obliged to protect young people from being “taken hostage” by politics and drawn into violence that could offend the law and ruin their future.

On Friday, China Daily also reported that their vice foreign minister sternly warned the U.S. embassy to “stop interfering with affairs of the Hong Kong Special Administrative Region in any form.” The minister was not happy that Congress reintroduced Hong Kong Human Rights and Democracy Act, which will place the city's human rights issue under increased scrutiny.

The propaganda organ also adamantly put forward on Saturday that, in reality, “mainstream opinion backs rendition bill,” citing a petition they said was signed by a little less than a million Hongkongers.

The closest the propaganda organ recently came to acknowledging that the city-wide protest is still happening at all, was when it reported that five protesters were arrested for “rioting during clashes.” In the same article, the paper quoted the police chief as saying the police never used excessive force, despite widespread reports of police brutality.

China Daily contents are surprisingly accessible even for Americans, as the paper routinely buys out advertisement spaces to publish propaganda in leading newspapers including the Washington Post, The New York Times and Wall Street Journal.

China is actually placing propaganda ads in the Des Moines Register and other papers, made to look like news. That’s because we are beating them on Trade, opening markets, and the farmers will make a fortune when this is over! pic.twitter.com/ppdvTX7oz1