Call of Duty: Why ISIS Recruiters Are So Successful in the West 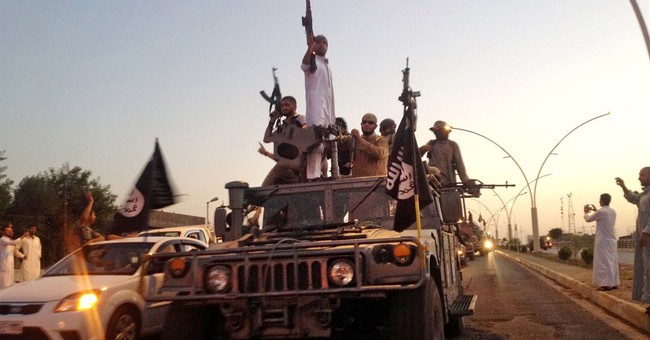 Approximately 20,000 foreigners have traveled to Syria to join in jihad with various terrorist organizations, including the Islamic State. Experts estimate about 3,000 recruits are from Western nations -- and up to 150 are from the United States.

Most recently, authorities believe three 15 and 16-year-old British Muslim girls have traveled to Syria to join the militant group after ISIS recruited them on social media. Without notifying their parents, the three boarded a flight from London to Istanbul last week.

The Islamic State seems to revel in atrocities, boasting to the world its gruesome beheadings, burnings alive, and parading soon-to-be-executed prisoners through crowded streets. As such, it seems unconscionable that any civilized Westerner -- Muslim or otherwise -- would be attracted to join in the fray.

Yesterday, British MEP Daniel Hannan explained that ISIS’ most powerful attraction to young people in the West is its solid identity and a definite agenda -- which contrasts with wishy-washy apologetic rhetoric prevalent in Western politics.

“It has this apocalyptic self-confidence,” Hannan told Greta Van Susteren on Monday. “And there are some young men, particularly, in every age, in every nation, who are attracted by that confidence....Lacking a powerful patriotic identity at home, they grope around for an alternative.”

Matthew Levitt, director of counterterrorism and intelligence at the Washington Institute for Near East Policy, agrees that recruiting appeals to those looking for direction:

“For many people who are lacking a strong sense of identity and purpose,” Levitt said. “Their violent radical global narrative provides easy answers and solutions: it can be very powerful message for people who are looking for answers.”

Recruiters use social media to make themselves as relatable as possible, painting jihad as a grand adventure to which anyone is welcome. On Instagram, an ISIS recruiter posted a picture referencing the video game, Call of Duty:

“This is our call of duty, and we respawn in Jannah,” the post read.

On Twitter, a recruiter told the twitterverse to “put the chicken wings down n come to Jihad bro.”

Though the media provides a constant account of ISIS’ brutality, teens on social media get a different narrative from the group’s recruiters: promises of acceptance, prosperity and purpose in the caliphate.

“ISIS’ leadership is made of people with very prominent roles that are foreigners so you’re not going to be discriminated against philosophically if you’re foreign,” Joshua Landis, an expert on Syria from the University of Oklahoma, told TIME.

Women, who have been specifically targeted for recruiting by ISIS, are promised sisterhood and solidarity.

“I will never be able to do justice with words as to how this place makes me feel,” said Umm Layth, supposedly a British woman in Syria married to a jihadi, on Twitter. She explained that she “cherishes” her friendships with “fellow sisters and brothers in the Islamic State.”

And as for friends and community, Aqsa Mahmood, a 19-year-old jihadi bride from Scotland explains:

“The family you get in exchange for leaving the ones behind are like the pearl in comparison to the Shell you threw away into the foam of the sea which is the Ummah [Muslim community]. The reason for this is because your love for one another is purely for the sake of Allah.”

With the promise of such a grand adventure, thousands of Westerners have flocked to Syria to join in the barbarity of ISIS -- about which they quickly forget to be horrified: tweets from ISIS supporters in Syria have described the group’s graphic videos as “gut-wrenchingly awesome” and “beautiful.”

Reports indicate that about 550 German citizens have traveled to Syria, and 180 have returned to German soil. French officials believe that 400 French citizens are currently in Syria, while 180 have returned. Approximately 600 British citizens have joined the fight, according to officials, and 300 have now returned to the U.K. Recently, ISIS has aggressively encouraged supporters in the West to launch local “lone wolf” attacks.

American National Security authorities have voiced concerns that once potential operatives return to the country using valid identification, it is very difficult to track who may be involved with the group or potentially planning “lone wolf” attacks.

According to the Federal Bureau of Investigation, ISIS has recruited children as young as 15 from within the United States. FBI Counterterrorism Director Michael Steinbach said earlier this month that he “can’t speak with 100 percent certainty that individuals of that age group have not gotten over there [to Syria] successfully.”