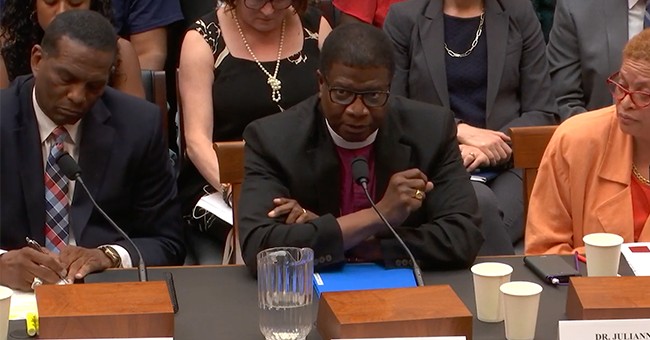 Sutton participated in a historic hearing regarding bill H.R. 40, which would establish a commission to “study and develop reparation proposals for African Americans.”

When asked if there should be exceptions for wealthy African Americans, Sutton said that reparations should be directed toward “niche initiatives” that address problems such as mass incarceration and poverty. Sutton was then quick to mention that white people need these reparations more than black Americans.

Further on in the hearing, Sutton went back to questioning white people on the state of their souls.

Later that night, Tucker Carlson questioned the bishop on his comments, telling Sutton he thought his remarks were the "antithesis of the Christian understanding of guilt, which is that God judges each person based on his or her choices, not on the choices made by his ancestors.”

“Absolutely, but that quote, I definitely was not referring to the eternal significance of people’s souls for eternity,” replied Sutton. “That was not my whole statement there. I talked about the souls of black folk and the souls of white folks, which is to say all of us have a stake in this.”

Sutton went on to say that his diocese, which has a $51 million endowment, agreed with his statements, and that reparations do not constitute "a check given to all black persons.”

Carlson then proposed that perhaps Sutton's diocese should use some of its funds to support reparations.

So your diocese has about $51 million in assets. It has shrunk. There are far fewer episcopalians than there were a generation ago, as you well know and I know as one of them. So why not sell some of your properties and put that money toward reparations? If the diocese really does support this issue so much. Why not pay for it? (Daily Caller)

Sutton responded that his diocese is studying that.

Following this interaction, Carlson asked Sutton how someone who did not commit a crime could be "be culpable for it." Sutton replied that "guilt is not the issue here" but rather "responsibility."

Carlson declared that he does not support reparations and has "no problem looking African-Americans in the eye" because he hasn't supported slavery or Jim Crow, emphasizing that he treats every person as an individual.

"So I don't bear any guilt for this--I don't--but you seem to think I do. Why?" Carlson asked.

Carlson moved the conversation to the millions of dollars in welfare payments African Americans receive from the government that "isn't working," poking a hole in Sutton's solution of increasing funding for "niche initiatives."

But after Sutton brought up the problems of mass incarceration and "underfunded school systems" in African communities, Carlson ended his interview with the line that he'd like to see the $51 million in Sutton's diocese "go towards that."

How Did This Ever Get Published? NYT Video Takes a Blowtorch to Blue States
Townhall
Trouble in Socialist-Ville? David Hogg tweets entire thread SHAMING progressives for their lack of self-awareness and ROFL
Twitchy
Dr. Fauci's Comments on New COVID-19 Variant and the Origins of the Virus Give the Game Away
Redstate
Whose Land Did Native Americans Steal Before Europeans Stole It From Them?
PJ Media