Black Democrat Calls Reparations ‘Justice For the Dead,’ Amid Backlash at Committee Hearing 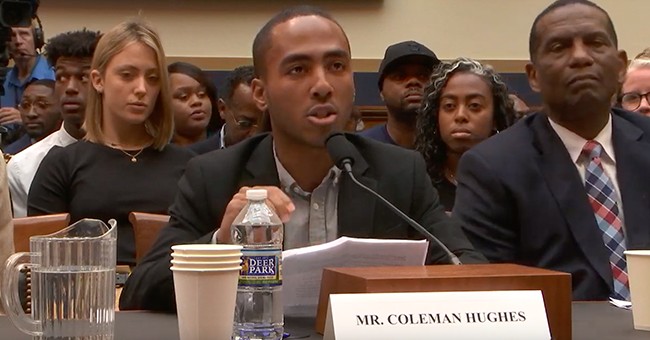 Black writer and columnist Coleman Hughes received backlash over his comments made against reparations at a congressional hearing Wednesday.

Tensions were high as the House Judiciary Subcommittee on Constitution, Civil Rights and Civil Liberties held a hearing on H.R. 40, a bill which would establish a commission to “study and develop reparation proposals for African-Americans,” while also requiring a formal apology by the U.S. government for its various human rights abuses against African Americans.

Rep. Sheila Jackson Lee (D-TX), who sponsored the bill, said that the U.S. government’s support of slavery and discrimination against black Americans must be “formally acknowledged and addressed.”

While most witnesses were in favor of reparations, writer and student Coleman Hughes was part of the vocal minority who opposed them.

Hughes said that while he does not wish to diminish the horrors and brutality African Americans faced under slavery and Jim Crow, he believes reparations "will compromise our ability to fix the present," listing several trials black Americans are facing currently.

"Racism is a bloody stain on this country’s history, and I consider our failure to pay reparations directly to freed slaves after the Civil War to be one of the greatest injustices ever perpetuated by the U.S. Government," Hughes said. "But I worry that our desire to fix the past compromises our ability to fix the present. Think about what we’re doing today. We’re spending our time debating a bill that mentions slavery 25 times and incarceration only once, in an era with no black slaves but nearly a million black prisoners. A bill that does not mention homicide once, at a time when the CDC reports homicide as the number one cause of death for young black men. I’m not saying that acknowledging history doesn’t matter, it does. I’m saying there’s a difference between acknowledging history and allowing history to distract us from the problems we face today."

Hughes continued by saying "black people don't need another apology," before mentioning that both the House of Representatives and the Senate issued apologies for slavery and Jim Crow in 2008 and in 2009, respectively.

"In 2008, the House of Representatives formally apologized for slavery and Jim Crow," Hughes said. "In 2009, the Senate did the same. Black people don’t need another apology. We need safer neighborhoods, and better schools. We need a less-punitive criminal justice system. We need affordable healthcare. And none of these things can be achieved through reparations for slavery."

Hughes said he knew he would receive backlash from both Democrats and Republicans for his testimony.

"Nearly everyone close to me told me not to testify today," he said. "They told me that even though I’ve only ever voted for Democrats, I’d be perceived as a Republican, and therefore hated by half the country. Others told me that by distancing myself from Republicans, I would end up angering the other half of the country. And the sad truth is that they were both right. That’s how suspicious we’ve become of one another. That’s how divided we are as a nation."

Moving on to his central thesis, Hughes declared that reparations would only divide the country further. The only types of reparations which should be considered are ones for black Americans who actually lived under Jim Crow laws, he contended.

"If we were to pay reparations today, we would only divide the country further," Hughes said. "Making it harder to build the political coalitions required to solve the problems facing black people today. We would insult many black Americans by putting a price on the suffering of their ancestors. And we would turn the relationship between black Americans and white Americans from a coalition into a transaction, from a union between citizens into a lawsuit between plaintiffs and defendants. What we should do is pay reparations to black Americans who actually grew up under Jim Crow and were directly harmed under second-class citizenship, people like my grandparents. Paying reparations to all descendants of slaves is a mistake. Take me, for example. I was born three decades after the end of Jim Crow into a privileged household in the suburbs. I attend an Ivy League school, and I’m also descended from slaves who worked on Thomas Jefferson’s Monticello Plantation. So, reparations for slavery would allocate federal resources to me, but not to an American with the wrong ancestry, even if that person is living paycheck to paycheck and working multiple jobs to support a family. You might call that justice. I call it justice for the dead at the price of justice for the living. I understand that reparations are about what people are owed, regardless of how well they are doing, I understand that. But the people who are owed for slavery are no longer here, and we’re not entitled to collect on their debts."

Hughes then pushed back on the idea of reparations as a whole, saying reparations require you to be labeled a victim, something the black community does not want.

"Reparations, by definition, are only given to victims," he said. "So, the moment you give me reparations, you’ve made me into a victim without my consent. Not just that, you’ve made one-third of black Americans who poll against reparations into victims without their consent. And black Americans have fought too long for the right to define themselves to be spoken for in such a condescending manner."

Hughes ended his testimony by saying that H.R. 40 is a mistake.

"The question is not what America owes me by virtue of my ancestry, the question is what all Americans owe each other by virtue of being citizens of the same nation," Hughes said. "And the obligation of citizenship is not transactional. It’s not contingent on ancestry. It never expires, and it can’t be paid off. For all of these reasons, bill H.R. 40 is a moral and political mistake."

After Hughes finished, the crowd started to boo, causing Chairman Cohen to hush those in assembly.

CBS reported that one audience member was so upset he got up and left.

Hughes's comments come after Senate Majority leader Mitch McConnell, in anticipation of the hearing, said on Tuesday he does not believe in reparations.

"I don't think reparations for something that happened 150 years ago for whom none of us currently living are responsible is a good idea," he said. "We've tried to deal with our original sin of slavery by fighting a civil war, by passing landmark civil rights legislation. We elected an African American president."

While H.R. 40 might receive sympathy from the Democratic-controlled House, its likelihood of passing the Republican-controlled Senate is low.