Democrats Want Beto to Drop Out and Run for Senate 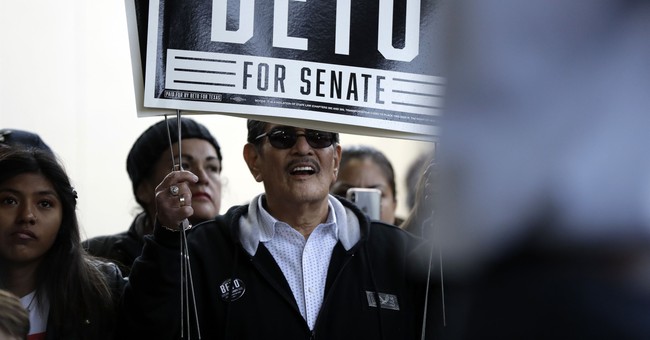 Democratic presidential hopeful Beto O’Rourke is increasingly facing pressure to drop out of the 2020 presidential race and run for U.S. Senate.

The former three-term House member and 2018 Senate candidate has been lagging in polls in recent weeks. In the latest CNN/Des Moines Register poll, O’Rourke polled at 2 percent among Iowa voters.

As O'Rourke's numbers continue to decline, more and more Democrats want him to drop out of the presidential race and challenge Sen. John Cornyn (R-TX) in his 2020 Senate reelection bid.

“The clock is running out for people who have not demonstrated any ability to mount a serious presidential bid to help make a real difference in their country by helping to turn the Senate,” Sen. Sheldon Whitehouse (D-R.I.) said to the Hill, expressing a sentiment shared by other Senate Democrats.

“It would be a shame if we elected a new president who faced the same enmity and obstruction in the Senate that Obama had to live through, all because a lot of candidates who had no shot wouldn’t run for winnable Senate seats,” Whitehouse included.

If O'Rourke and other poor-performing presidential candidates don't run for Senate in 2020, it will be hard for Democrats to take back their majority. This would be a boon to a newly elected Democratic president--if efforts to unseat President Trump are successful.

“We have a number of presidential aspirants who would make excellent senatorial candidates, but they first have to be committed to the race. I hope they’ll reach the point where it makes sense to them,” he said.

Jeff Hewitt, a Democratic strategist, said that O'Rourke has the best chance of beating Cornyn.

“The fundraising ability, the idea of turning a Texas Senate seat blue, those are all the things that fueled his Senate campaign, which nobody cares about when he’s running for president,” he told the Hill. “The smartest political play for O’Rourke would be to go back to Texas and run for Senate."

Texas voters agree. In a new Quinnipiac University poll, 60 percent of Texas Democrats want O'Rourke to return to Texas and run for Senate.

O'Rourke isn't the only presidential hopeful experiencing scrutiny. Former Colorado Gov. John Hickenlooper and Montana Gov. Steve Bullock, both of whom are polling at or below 1 percent, are also facing pressure to drop out.

The Democrats need four more seats to regain their Senate majority. Currently, Republicans hold the majority with a 53-47 seat total.

Senate Democrats have not called on any presidential candidate to drop out.