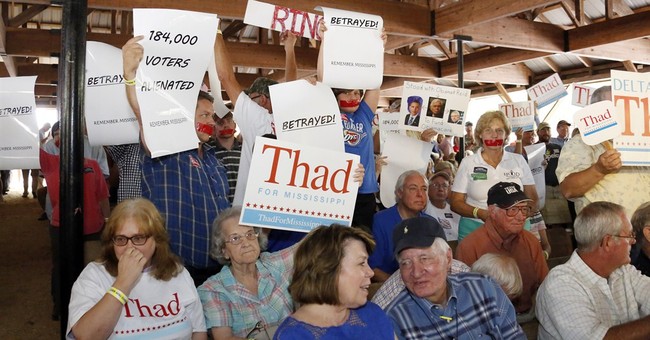 Editor's Note: In the September issue of Townhall Magazine, where this column originally appeared, RedState's Bryan Pruitt explains why it's long past time for change at the NRSC.

Perusing the National Republican Senatorial Committee website, you would think it’s all kumbaya around the campfire as Republicans throughout the country work to take back the Senate in November. What is really going on is a behind-the-scenes, Washington–based political war against conservatives who dare to challenge the status quo.

The NRSC says it “provides invaluable support and assistance to current and prospective Republican U.S. Senate candidates.”Its real mission today is to protect entrenched, out-of-touch incumbents and personally destroy anyone who would dare to raise their hand and offer to lead, perhaps in a new direction.

What happened in the Mississippi runoff has over shadowed a broader, stealth campaign against conservative candidates across the country. Here and there, and without much fanfare, those who don’t change their views and conform to D.C.norms are targeted for defeat, not byDemocrats, but by Republican fat cats.We shouldn’t be surprised though, they are not used to this new crop of principled conservatives who feel no need to kiss the papal ring.

We will never know the true depths party elders sunk to in their attempt to keep an old-school appropriator afloat. However, what appears to be a big win and six more years of a reliably bought vote will actually come back to haunt those who did anything and everything to win. There will be more primaries, and our win-loss record stands to dramatically improve.

Primaries are good and keep elected officials connected to their constituents. Primaries bring focus to promises made, and promises broken. The fact is we need more primary opportunities. Good incumbents will survive the process and better represent the people that put them in power.

RedState editor Erick Erickson is fond of saying “Conservative in the primary, Republican in the general.” He actually means what he says and has taken a fair amount of heat for making general election contributions to Republican candidates RedState did not support in the primary. There are reasons for this. First and most obvious, the Republican, whomever it is, will almost always be better than the Democratic candidate.

The more important point though is that RedState is a movement. It is, as our founders have said from the beginning, an endeavor to educate, motivate, and activate conservatives.

The establishment would much prefer you sit and take direction from central command. In this they are very similar to our Democratic friends. RedState conservatives instead stand up and demand accountability and change.

The RedState movement challenges the establishment to care about the way in which we win or lose. We take very seriously the biblical admonition in Mark 8:36: “For what shall it profit a man, if he shall gain the whole world, and lose his soul?” Given the Republican Party’s history in the South, it is especially unseemly to stoop to buying votes and race baiting to achieve victory. We are better than that.

And finally, because it’s a movement, RedState conservatives aren’t discouraged by a loss here or there. There are flawed candidates, bad fundraising, and circumstances beyond control that cause an otherwise good and worthy conservative candidate to lose. We soldier on.

We soldier on toward November and that real opportunity to reacquaint the Democrats with what it’s like to be in the minority. Senate Republicans are eager to work with their House colleagues to pass real conservative reforms and challenge President Obama to work with them in his remaining two years in office. But before beginning that noble task, it is important to clean up the way the game is played.

First order of business after Election Day should be for the new Republican majority in the Senate to elect Sen. Ted Cruz (RTX) as chairman of the NRSC. Cruz should then start handing out pink slips, on day one. Anyone with any involvement in a rotten culture that rebukes political competition and the marketplace of ideas should go.

Cruz should publicly declare that the NRSC is neutral in primaries from now on, no matter how valuable the particular sacred cow may be to vested interests in Washington. Imagine deploying all these resources to defeat Democrats and really improve America for all Americans. It is time to let the real work begin.

Bryan Pruitt is a Washington, D.C.-based director at RedState.

FBI Attorney Clinesmith Did NOT Enter a Guilty Plea On Friday To the Filed Information — That Is Not Normal
Redstate
Fauci: If we can safely shop at the grocery store, we can safely vote in person
Hotair