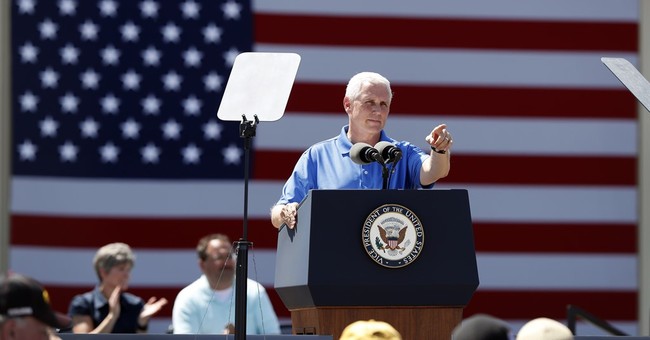 Washington, D.C. - In his address at the National Catholic Prayer Breakfast this morning, Vice President Mike Pence renewed the White House’s commitment to the sanctity of life. This was a completely lost concept under the Obama Administration.

Pence reaffirmed not only his individual respect for life, but also President Trump’s.

“I couldn’t be prouder to serve under a president who stands without apology for the sanctity of human life...President Trump stands with the most vulnerable: the aged, infirm and unborn.”

Vice President Pence shared his excitement for the opportunity to allow states to defund Planned Parenthood, which is a priority of the Trump Administration. Pence received an uproar in applause and a standing ovation for this sentiment.

In a final expression confirming the Trump Administration’s priority of ensuring that taxpayer dollars do not fund abortions and that respect for life is revitalized in America, Vice President Pence won over the crowd of pro-lifers.

“Life is winning in America again,” he said.

The vice president also expressed the president’s strong support of religious liberty for Americans and those around the world saying that “President Trump stands with those who are persecuted for their faith around the world, no matter the country they call home or the creed they profess.”

He continued that believers of all faiths have suffered at the hands of terrorist groups, but especially Christians.

“It seems that the practitioners of terror harbor a special hatred for followers of Christ, and none more so than the barbarians known as ISIS,” he said.

Mentioning President Trump’s meeting with Pope Francis, he said that the president and pope talked of the persecution of Christians and other people of faith around the world, and how our nation and the Church could work together to “address” the issues.

“In Saudi Arabia only a few days earlier, on the world stage President Trump had condemned in his words the murder of innocent Muslims, the oppression of women, the persecution of Jews,” Pence said. “And he condemned slaughter of Christians across the wider Arab world.”

The event overshadowed by the recent terror attacks, he began by “expressing the sorrow of our entire administration and all the American people for the horrific terror attacks this weekend,” continuing, “with word this morning of another terrorist attack in Melbourne, Australia. Our hearts break for the families of the victims.”

The vice president mentioned the many cities around the world that have suffered from these attacks, including Manchester, Paris, Istanbul, and Berlin.

The audience enthusiastically responded with applause.

Pence emphasized his own commitment to respecting life, combatting terrorism and protecting religious liberty. These policies appear to be priorities in the Trump White House.