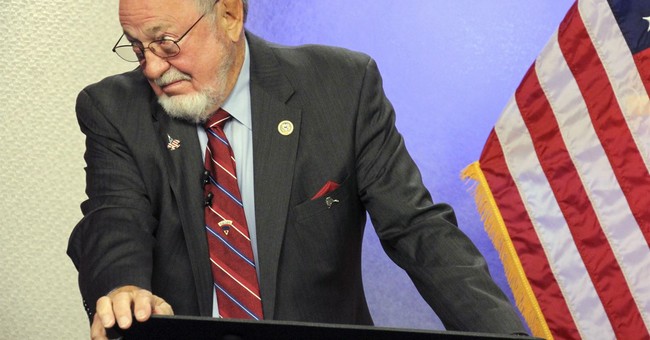 Happy Friday, folks. If you are not feeling sluggish from all the candy consumed on Halloween you may be feeling a little worn down from keeping up with the clown show on Capitol Hill during the impeachment inquiry. On Thursday, Democratic Rep. Katie Porter dressed up as Batman. But, on the other side of the aisle, Republican Rep. Don Young from Alaska was so fed up with the nonsense from leftists, he started head-butting camera's in order to get his message across.

The far-left group MoveOn.org tweeted, "Watch Republican Congressman @repdonyoung (R-AK) headbutt the camera when we asked him if it’s okay to ask foreign governments to interfere in our elections."

And that's exactly what he did.

Watch Republican Congressman @repdonyoung (R-AK) headbutt the camera when we asked him if it’s okay to ask foreign governments to interfere in our elections.

And no, he never answered the question. pic.twitter.com/FWgmkdzycG

Rep. Young is known for his antics on Capitol Hill.

Regarding his vote against the impeachment inquiry, Rep. Young slammed Democrats (not physically) for their actions.

"This is not a question of whether there are sufficient grounds for impeachment, it is simply a sham vote to allow House Democrats to continue to trample on the longstanding impeachment process in the House. Everyone in this country deserves due process, but this vote is unfair and a total charade," Young told media.

Considering the impeachment inquiry formally started just yesterday, be ready to buckle up for a wild ride during this process.