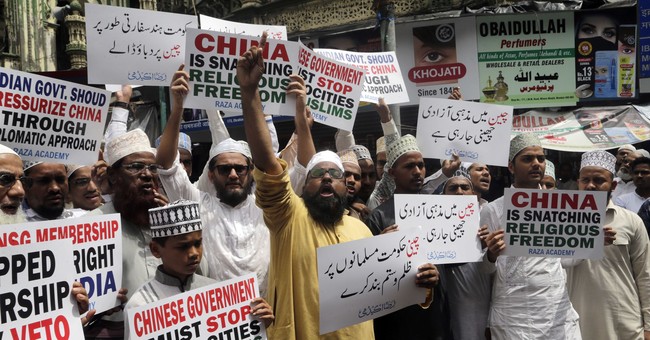 A Chinese communist official is defending his nation's detention of millions of Muslim Uighur minorities in internment camps where these individuals are indoctrinated and violated, saying that China is simply providing "vocational educational training to them."

Yu Jiantuo is China's assistant secretary general of the China Development Research Foundation (CDRF). CDRF is run by the State Council. He spoke at the University of British Columbia’s Point Grey Campus and took questions from Canadian media last week. Yu told reporters that Mulsim Uighurs “lack social and economic opportunities" so the state decided "to provide vocational educational training to them" by holding them against their will and stripping down their human dignity.

Critics are calling Yu's claims propaganda and questioning why he would be allowed to speak at the university.

"The claim that the camps used by the Chinese government to incarcerate one million Uighurs in Xinjiang are not in fact concentration camps is typical of regime propaganda and is completely false. The prison-like conditions inside these camps are well known," Marcus Kolga, a senior fellow researching foreign disinformation at the Macdonald-Laurier Institute," told The Star.

"So while free speech is important, if lies and propaganda are left unchallenged then we risk facing the eventual death of truth," he added.

Pompeo declared that China instituted "a highly repressive campaign" due to its "mass detentions in internment camps; pervasive, high-tech surveillance; draconian controls on expressions of cultural and religious identities; and coercion of individuals to return from abroad to an often perilous fate in China," among other things.

"The United States calls on the People's Republic of China to immediately end its campaign of repression in Xinjiang, release all those arbitrarily detained, and cease efforts to coerce members of Chinese Muslim minority groups residing abroad to return to China to face an uncertain fate," Pompeo added.