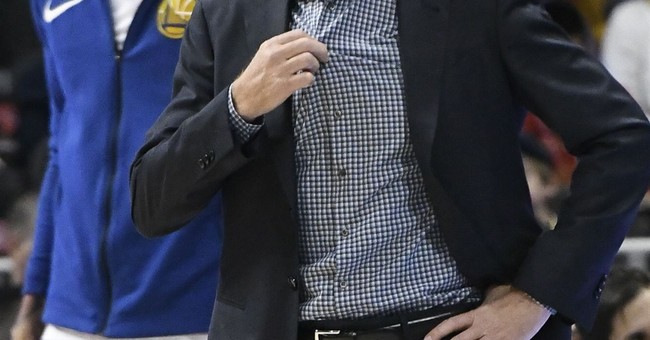 As Townhall has covered all week, the National Basketball Association has revealed itself to be nothing more than a compilation of useful idiots beholden to communist China. Perhaps no NBA coach has exposed himself as a coward this week more than the usually outspoken Steve Kerr. Kerr has long been a critic of President Donald J. Trump and has often advocated for left-leaning stances with his platform afforded to him as a former NBA player and head coach of the Golden State Warriors. But suddenly, this week, when it comes to China, Kerr claims he simply does not know enough about the subject to speak out on it. First, he said he was reaching out to his brother-in-law, a professor, for more information before he commented on the Hong Kong protesters fighting for freedom. Well, a few days went by, and it looks like Kerr now has a new excuse as to why he will not condemn China's human rights abuses. The Golden State Warriors coach says that America, too, has egregious human rights abuses on the level of China such as recent mass shooting. Yes, Kerr really argued that America's problem with lone wolf shooters is on the same level as China's forced abortions, indoctrination camps, worker abuses, and countless other atrocities committed by the government.

Late Thursday night, a questioner asked Kerr at a press conference, "In all the years that you've gone to China and the teams have gone to China, has it ever come up that the NBA's business interests in China are at odds with a country whose human rights record is not in step with the United States?"

"It has not come up in terms of people asking me about it or discussing it, no. Nor has our record of human rights abuses come up either. You know things that our country needs to look at and resolve?" Kerr remarked.

"That hasn't come up either. So none of us are perfect and we all have different issues that we have to get to," Kerr continued. "And saying that is my right as an American doesn't mean that I hate my country, it means I want to address things right."

"But people in China didn't ask me about, uh, you know people owning AR-15s and mowing each other down in a mall," he continued as if it were somehow comparable. "I wasn't asked that question, so we can play this game all we want and go all over the map, and you know there's this such issue and that issue and the world is a complex place and there's more gray than black and white. I realize that, what's popular these days is to make it black and white. And you're either good or you're evil. So that's convenient to do to do things that way, but not realistic."

Well, several people on Twitter quickly let Kerr know more about what sort of abuses occur in China to help clear up any "gray" area that he might find between it and the USA.

Maybe Kerr should do a little light reading about kidneys being ripped out of detainees in chinese prison camps while they are alive AND awake. State sponsored terror in Steve Kerr’s back pocket. https://t.co/tOIbVebS2s

Hey @SteveKerr — there are 1 million Muslims in Chinese prison camps because they aren’t allowed to have ARs.

China was able to kill 80 million of their own people....because they weren’t allowed to own AR15s.

My timeline is 80% people bashing Steve Kerr for drawing equivalence between China's human rights abuses and those who commit mass shootings here.

Their cowardice should be long remembered.

60M people killed by the Communist Chinese govt... vs. 297 murders with rifles committed by criminals in the U.S... totally the same thing, @SteveKerr. ??pic.twitter.com/XC4nYRcup2

With his comments, Kerr has illuminated his relative lack of knowledge of world affairs, morality, and the difference between the United States and China. It's a shame.