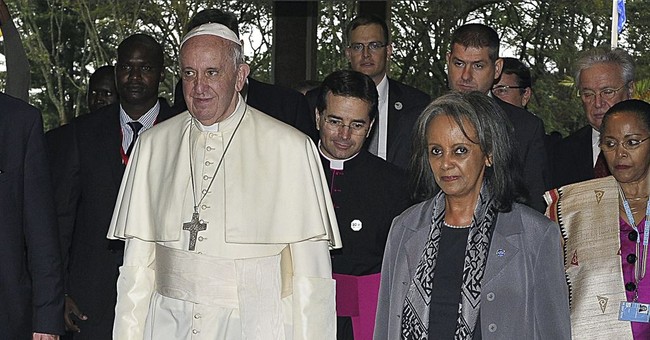 The leader of the Roman Catholic Church addressed a group of Jesuits from Mozambique, Zimbabwe, and Portugal in early September, but the transcript of this conversation was not released until Thursday. According to La Civilta Catolica, on September 5 in Mozambique Pope Francis "asked those present to form a circle with chairs. The conversation lasted a good hour. The provincial gave a word of welcome, then the pope invited the Jesuits to ask questions to start the conversation." During that discussion, the pope slammed clericalism and insisted that priests focus too much on sins of adultery, lust, and sex when instead they should be focusing on on sins of social injustice and slander.

"We focus on sex and then we do not give weight to social injustice, slander, gossip and lies. The Church today needs a profound conversion in this area," he remarked.

Other popes, such as Pope John Paul II, have long said that adultery cuts at the heart of the "indissobulity of marriage" and warned against the sin of lust.

"The commandment, 'Thou shalt not commit adultery,' finds its just motivation in the indissolubility of marriage, in which the man and the woman, by virtue of the original design of the Creator, are united so that the two become one flesh," Pope John Paul II said in October 1980.

"Adultery, in its essence, conflicts with such unity, in the sense in which this unity corresponds to the dignity of the persons," he added.