Joe Biden Sure Has Had A Lot Of 'Gaffes' Lately 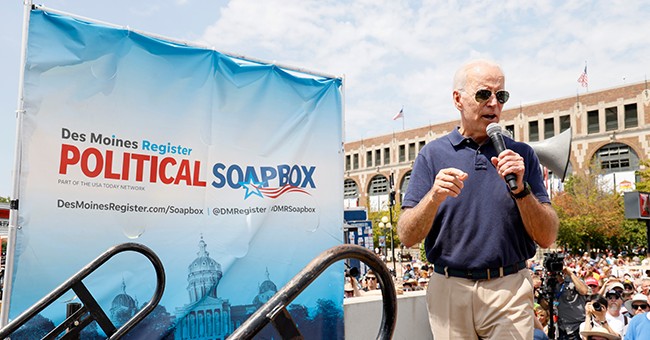 Former Vice President Joe Biden had another 'gaffe' yet again on the campaign trail on Saturday. This time the 76-year-old told media how much he loved being in the state of Vermont...except, he was actually in New Hampshire. This is just the latest in a litany of verbal miscues he has had so far on the presidential campaign trail.

The GOP's Steve Guest picked up the Vermont mistake and shared a video of it on Twitter.

"I’ve been here a number of times...I love this place. Look, what’s not to like about Vermont in terms of the beauty of it?" Biden told reporters.  He was speaking in Keene, New Hampshire.

Joe Biden in Keene, New Hampshire: "I’ve been here a number of times...I love this place. Look, what’s not to like about Vermont in terms of the beauty of it?” pic.twitter.com/YZBP4ybQ3z

This kind of faux pas isn't some one-off thing, either. Twitter user @BetaOdork tweeted a clip on Thursday of Biden thanking somebody by saying "my longfriend timefriend she's a friend and she's been my friend in and out of public life." It's entirely unknown what he meant to say. The clip was taken out of context, so it's unsure who or what he was referencing, but it's clear that we can't just blame that mistake on the teleprompter.

@BetaOdork also tweeted a video of most of his errors on the 2020 campaign trail thus far. The evidence doesn't invoke a lot of confidence that Biden knows what he's saying. It really is must-watch TV:

Now look, Joe Biden's medical doctor came out this week and said his brain is sharp as ever. So, the point of this article isn't to say he has some sort of medical deficiency. But, imagine how badly President Donald J. Trump will tear Biden apart on the debate stage if he utters any of the garbage like in these videos? He'll make Biden look like a complete clown.