Ken Cuccinelli Takes CNN To The Woodshed Over Statue of Liberty Poem, Immigration 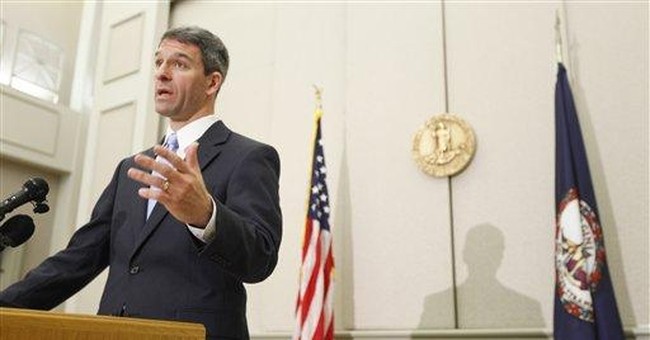 The Trump administration is in trouble with the mainstream media once again for simply enforcing a law that has been on the books for years. On Monday, acting director of US Citizenship and Immigration Services announced that immigration authorities will take into consideration whether or nor potential green card and visa holders will become a "public charge" -- meaning whether not the person will depend on welfare or Medicare when they arrive in America. The reasoning behind this is that America should accept immigrants who won't simply take advantage of the country's generous welfare state. But some critics like CNN's Erin Burnett question whether this new policy tramples upon Emma Lazarus' poem, The New Colossus. A stanza of that late 19th-century poem is famously on a plaque on the Statue of Liberty. It says, "Give me your tired, your poor, your huddled masses yearning to breathe free." On Tuesday, Cuccinelli explained to NPR that self-sufficiency has always been expected of immigrants, regardless of what people may think the poem stands for. His defense of the public charge rule among other immigration matters was quite convincing on CNN on Tuesday night.

Here's what Cuccinelli said on NPR this week:

"Would you also agree that Emma Lazarus's words etched on the Statue of Liberty, 'Give me your tired, give me your poor,' are also a part of the American ethos?" NPR's Rachel Martin asked Cuccinelli on "Morning Edition" in an interview published Tuesday.

"They certainly are: 'Give me your tired and your poor who can stand on their own two feet and who will not become a public charge,'" he replied. "That plaque was put on the Statue of Liberty at almost the same time as the first public charge was passed -- very interesting timing."

First, CNN's Erin Burnett asked him to explain his response to lawsuits against the announcement that the rule will be enforced.

"Well, I can't say it's terribly surprising. I mean this a 1,000-page rule. I'd be willing to bet, and I'm not a betting man, that they haven't read it front to back. And while not everybody has to read it, if you're going to file a lawsuit you need to know what you're filing a lawsuit on," Cuccinelli explained.

Cuccinelli then explained that America has been operating "dormant guidance" since the 90s because Clinton's administration, as well as Bush's and Obama's, never created a rule to actually enforce the law.

Burnett then asked how Cuccinelli defends the law when his own colleague Ben Carson said he was able to thrive because of food stamps and welfare. Burnett gave a hypothetical and said that the public charge law might prevent the next Ben Carson from coming to the country.

But, Cuccinelli pointed out that Carson was already an American citizen, and the benefits he received were paid for by fellow citizens. He added that immigrants have always been expected "to be able to support themselves."  This has been "overwhelmingly supported by the American people" he adds.

Burnett pressed Cuccinelli, saying that he is admitting that the rule would prevent the next Carson but, Cuccinelli said that welfare is not the sole determining factor of whether or not an immigrant is allowed in the country. Other issues like potential careers, health, family and more have always been considered.

Seemingly frustrated, Burnett then accused Cuccinelli of re-writing poetry while on NPR.

"I was answering a question. I wasn't writing poetry, Erin. Don't change the facts. You're twisting this like everybody else on the left has done all day today," Cuccinelli told the host.

After a back-and-forth, Cuccinelli said, "I'll answer your substantive questions, please ask one."

When asked what he thought that poem meant, Cuccinelli said,  "Of course that poem was referring back to people coming from Europe where they had class-based societies, where people were considered wretched if they weren't in the right class, and it was written one year after the first federal public charge rule was written."

He also pointed out that the year that this plaque went on the Statue of Liberty was 1903. It was the same year that massive immigration reform was enacted which expanded who was considered a public charge.

Burnett posits that her family would have been excluded if this law was in place when her impoverished ancestors came from Scotland. Cuccinelli responded by saying his Italian grandfather was poor as well. He also added, once again, that Burnett is assuming that the one factor of wealth status will be the sole deciding factor in whether or nor green cards and visas are granted. But that isn't the case, Cuccinelli added. He went on to explain the "totality" of factors will be taken into consideration.

Burnett also tried to pin Cuccinelli down over the viral video 11-year-old girl who was crying because her father was arrested during recent Immigration and Customs Enforcement agent. But, the acting UCIS director emphasized that the crime her parents committed was coming into the country illegally and that ICE handled the raids very gently. The full interview is well worth the watch.