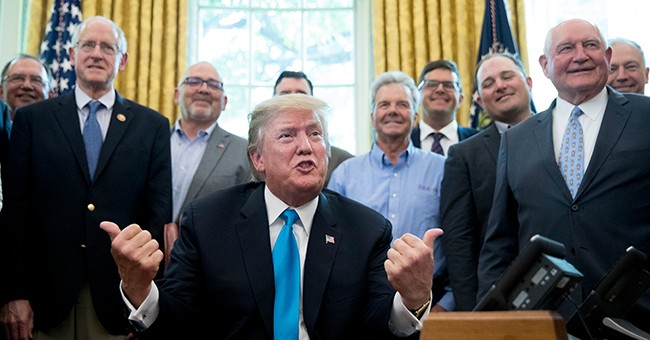 Ian Bremmer, a resident Twitter academic whose genius idea to put out a fake quote from President Trump purporting to say North Korean Dictator Kim Jong UN would make  a better president than former Vice President Joe Biden, has deleted his fake news from the website after several elected officials, commentators, and analysts repeated Bremmer's lie to thousands, if not millions of people.

As reported by Jerry Dunleavy of the Washington Examiner, Bremmer is a "geopolitical analyst, journalist, and cable news regular." On Sunday afternoon, Bremmer decided to tweet, "President Trump in Tokyo: 'Kim Jong Un is smarter and would make a better President than Sleepy Joe Biden.'"

However, after the Examiner's Dunleavy asked for proof this was an accurate quote, the New York University professor backtracked, saying, "it's plausible," but ultimately admitting he made up the quote to prove an overall point.

UPDATE: @ianbremmer has now admitted that he fabricated this viral Trump quote. And yet it is being shared by journalists and congressmen as if it is real. pic.twitter.com/QgNd9DnN8g

Dunleavy continues, saying, "Bremmer also responded to the reporter’s tweet by calling his own tweet an 'objectively ludicrous quote.' And Bremmer tried to defend his spreading of false information by calling his fake quote 'kinda plausible … especially on Twitter, where people automatically support whatever political position they have.'"

"That's the point," Bremmer added. Bremmer then deleted all of his tweets regarding the initial quote.

This morning, President Donald J. Trump chimed in on the "fake news" saying, "This is what’s going on in the age of Fake News. People think they can say anything and get away with it."

.@ianbremmer now admits that he MADE UP “a completely ludicrous quote,” attributing it to me. This is what’s going on in the age of Fake News. People think they can say anything and get away with it. Really, the libel laws should be changed to hold Fake News Media accountable!

Numerous people, on the left and the right, condemned President Trump immediately after reading Bremmer's quote and taking it as truth. Now, they are condemning Bremmer. Whatever point Bremmer was trying to make, it seems like it was lost on the general viewing public who now see the analyst as a liar and one not to be trusted.