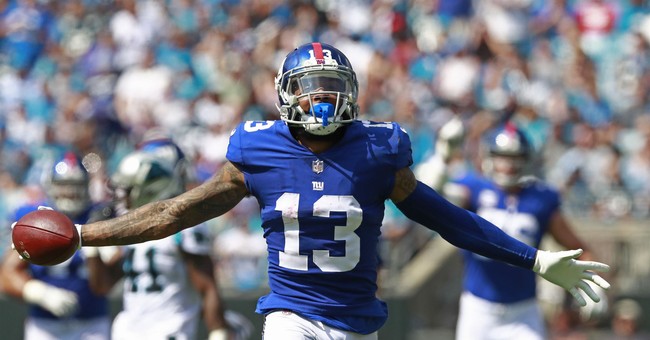 "Baseball is what we were, and football is what we have become," Washington Post's Mary McGrory once famously wrote. And with our new national pastime comes bouts of jubilant celebrations with team victories, or potential victories. But, not everybody pays close attention to the NFL during the offseason. One Cleveland resident did not get the memo that the Browns signed superstar receiver Odell Beckham Jr. to the team and she called the police on her neighbor shrieking with excitement over the new player as he ran down the street flailing his arms.

On March 13, the Browns acquired "OBJ" from the New York Giants.  Instantly, Cleveland fans let out cries of joy as they imagined him making one hand catches from passes thrown by quarterback Baker Mayfield. One fan, Robert Stewart simply could not contain his emotions.

"And then boom. We got OBJ. I was so excited, I couldn't help myself, I was just jumping around my house and my little brother told me to stop but I couldn't because I was so excited," Robert Stewart told the media. Stewart then ran down his street jumping and waving his arms. This startled his neighbor who was pulling into her driveway with her children.

Corita Jackson, Stewarts' neighbor, called the police fearing that the man was a threat to her family.

“There’s someone out in front of our house, we just drove home and he’s yelling and screaming and like flailing his arms,” the woman told the emergency operator as she called 911. “And, you know, I don’t want to get my kids out of the car yet because I don’t know what’s going on."

Police then arrived and confronted Stewart. The fanatic explained why he was so excited and the situation resolved itself after authorities explained what had occurred in the  NFL.

"Oh we got OBJ, then we dapped it up," Stewart regarding the police and his neighbor. "Everything was all cool and they went back on about their day."

A video reenactment of his excitement as well as actual footage  Stewart posted to his social media account can be found here: