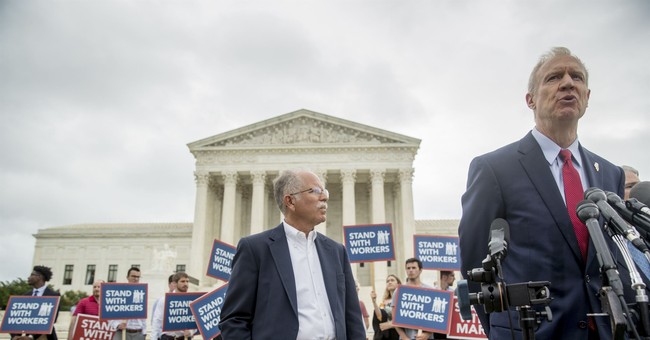 The New York Post recently reported that more than 10,000 New York City employees decided that they actually did not want to pay money towards their previously forced monopoly bargaining representatives. These workers were freed from paying forced union dues by a 5-4 Supreme Court ruling in Janus v. AFSCME which declared that forced public sector union fees are a violation of the First Amendment.

According to the New York Post, this resulted in nearly a quarter million worth of union fees being subtracted from the hands of Big Labor.

"City records show that there were 314,770 city workers paying union dues prior to the Janus v. AFSCME ruling on June 27 that found government workers can’t be forced to pay dues to unions that represent them in collective bargaining.

Assisted by free legal aid from the National Right to Work Legal Defense Foundation plaintiff Mark Janus, an Illinois childcare support specialist, sued AFSCME claiming his first amendment rights were being violated by being forced to pay money towards an organization he did not agree with to speak to the government on his behalf. The High Court ruled 5-4 in his favor overturning 40 years of precedent and declaring that unions and the government cannot force individuals into unionization nor subsidizing speech with which they disagree.

After the ruling, National Right to Work President Mark Mix released the following statement to the press:

“Today’s decision is a landmark victory for rights of public-sector employees coast-to-coast that will free millions of teachers, police officers, firefighters and other public employees from mandatory union payments. While this victory represents a massive step forward in the fight to protect American workers from forced unionism, that fight is far from over. Union officials and their allies in state government have already taken steps to prevent workers from exercising their rights under the Janus decision, while millions of private sector workers in states without Right to Work protections are still forced to pay union fees or else be fired. Further, workers of all stripes continue to have their freedoms of association violated by being forced under union monopoly ‘representation’ against their will. So while we celebrate today’s decision, there remains much work to do to both enforce and expand upon this historic victory over coercive unionism.”

Critics will argue the mass exodus of workers leaving unions, but still maintaining whatever supposed benefits unions earned on their behalf are creating a "free rider" problem. But, pro-right to work individuals would assert that the only reason unions are forced to cover all employees in a bargaining unit is because union representatives often fight for monopoly representation in the first place.