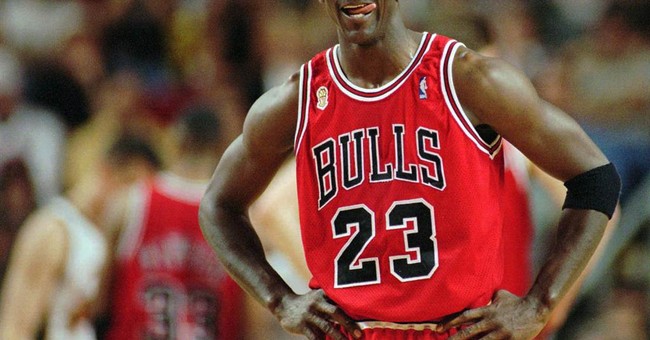 President Donald J. Trump expressed his support for NBA legend Michael Jordan last night when he ended a tweet aimed towards Lebron James with "I Like Mike." But, it would appear Jordan stands with the potential heir to his throne as the King of the NBA rather than the president.

As reported earlier, Lebron James said in a CNN interview with Don Lemon "that he would not be willing to sit down with President Trump. Lemon asked him, "What would you say to the president if he were sitting right here?"

"What I've noticed over the past few months [is] he's kinda used sports to kinda divide us, and that's something that I can't relate to," James said. “I can't sit back and say nothing." James was referencing President Trump's disgust with NFL players and other professionals athletes who kneel during the playing of the national anthem as a form of protest."

These remarks apparently annoyed Trump. He lambasted Lebron as stupid.

Today, Michael Jordan issued a statement via a representative simply saying, "I support L.J.. He’s doing an amazing job for his community.”

President Trump has praised Lebron James in the past and appeared to be a fan of his until James supported Hillary Clinton in the 2016 presidential election. It is unclear how the president will respond to Michael Jordan.