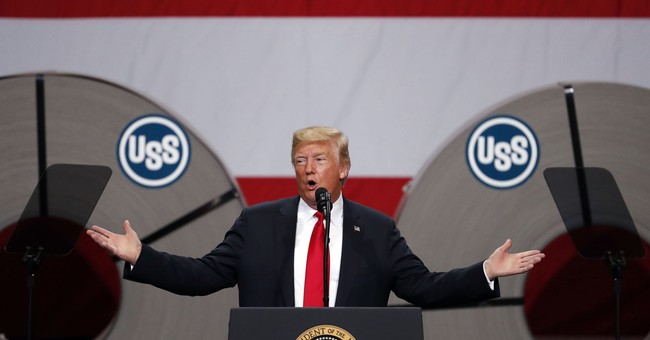 President Donald J. Trump indicated today that he would be willing to "shut down the government" if Democrats refused to give him the necessary funding for the border security, including the long-promised "wall" along the southern border.

President Trump has made similar remarks in the past.  "[Democrats] don't want the wall," Trump said in May. "But we're going to get the wall, even if we have to think about closing up the country for a while."

And in April, at a campaign rally, the president said, "We come up again on September 28th and if we don’t get border security we will have no choice, we will close down the country because we need border security.”

“First, we must protect the American people, the homeland and our great American way of life. This strategy recognizes that we cannot secure our nation if we do not secure our borders. So, for the first time ever, American strategy now includes a serious plan to defend our homeland," President Trump said last December.

"It calls for the construction of a wall on our southern border, ending chain migration and the horrible visa and lottery programs, closing loopholes that undermine enforcement, and strongly supporting our Border Patrol agents, ICE officers, and Homeland Security Personnel.”

President Trump also reminded Congress that many illegal aliens, parents or not, take advantage of America's lax immigration policies which results in serious consequences for the American people.

Please understand, there are consequences when people cross our Border illegally, whether they have children or not - and many are just using children for their own sinister purposes. Congress must act on fixing the DUMBEST & WORST immigration laws anywhere in the world! Vote “R”