A Woman Married a Tree in Order to Save It From Destruction...Wait, What? 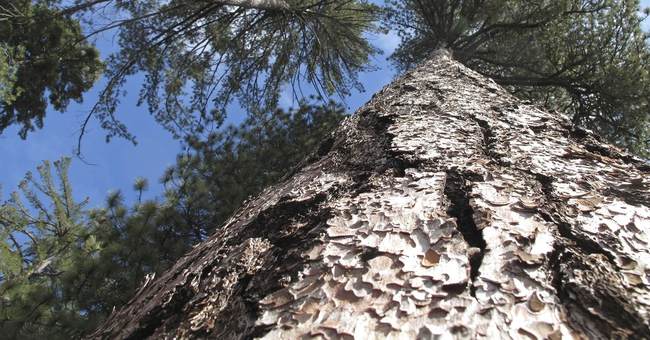 True love never dies, baby. At least that is what one lady hopes is true in order to save a beloved ficus tree in her hometown. She loves that bad boy so much, she decided to marry it.

Karen Cooper betrothed a tree in her hometown in order to protest potential removal. According to the News Press, she got the idea from a group of women in Mexico who do a similar activity in hopes of drawing attention and thereby public support against deforestation.

The tree became the center of a neighborhood controversy when city staff began discussing cutting it down last year. Cooper, who lives in the Valencia Terrace neighborhood that includes the tree's riverfront park, began mobilizing to save it, an effort that culminated with the waterfront nuptials Saturday, complete with flowers, music, a tree-decorated wedding cake and a canine ring-bearer named Little Bear.

Though rooted on city property, some of the Indian laurel's 8,000-square-foot canopy and root system extends to a neighboring lot, for sale for $1 million.

Last year, would-be buyer Jeff Romer asked the city what his legal responsibilities to the tree would be. "All I was doing was my due diligence on the lot," he told the Fort Myers Beautification Advisory Board at its last meeting. "If I'm allowed to touch the tree, trim the tree, prune the tree ... because I don't want to be liable if the tree falls over onto the neighbor's house."

Neighbors of Snell Family Park in Fort Myers are hoping to save an old fig tree that shades the park. The owners of the lot next to the park want the tree cut down.

After a site visit last December the city's public works department OK'd the tree's removal after the beautification board had been notified. In February, the board discussed spending $13,000 to cut down the sprawling tree and replacing it with smaller geiger trees.

Once neighbors got wind of those plans, the protests started: phone calls, posters, fliers and, most recently, Cooper's Saturday wedding, at which she and several other white-dressed women vowed to honor and protect it before some 50 onlookers.

"But even though the city appears to be backing away from its initial plans to cut down the ficus, its fate remains uncertain, Cooper points out.

"It's still not saved," she said.. "It's still not decided, and that's what I don't understand. If the arborist says it can be trimmed and if ... Jeff Romer stood up at the last meeting and said I never asked for the tree to be cut down, and if we all in the neighborhood don't want it to, why are we still talking about cutting the tree down?"

It appears obvious that the tree is not going anywhere. If there is some major update, this story will reflect it. But for now, let us look back to a decade ago and to one of the greatest Youtube videos of all time. A group of hippies in 2008 in North Carolina screamed their hearts out in a wooded glen in order to show their love for trees. It truly is must watch TV. Never change tree huggers, never change.