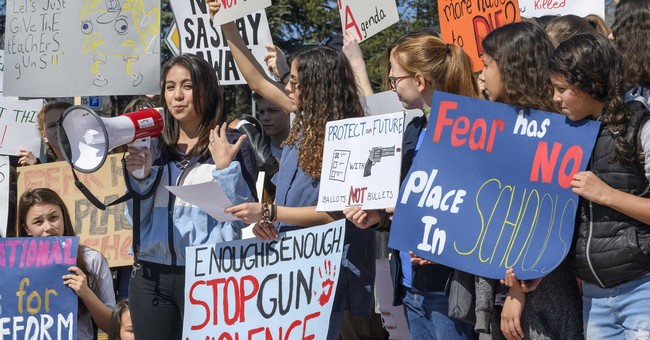 Hundreds of thousands are gathering in Washington, DC and across the globe to advocate stricter gun control, but the student speakers in the nations' capital are making it abundantly clear that the March for Our Lives is a little more complicated than calling for safer schools. In fact, most of the calls for reform today have been tried and failed already.

David Hogg has been the most vocal, or at least the person with the most media attention, of the student organizers of this event. Consistently, he has called for tighter gun control. But, his messaging has taken a turn in recent days to instead focus on perceived racial injustice and white privilege. Ryan Saavedra of The Daily Wire has done excellent job capturing the increasingly leftist talking point spouted by these students.

In a recent interview, Hogg told the audience that, "I think one of the greatest obstacles that we've faced though with this movement is the fact that there is a lot of racial disparity in the way that this is covered."

"If this happened in a place of a lower socio-economic status or a place where like a black community, no matter how well those people spoke, I don't think the media would cover it the same and I think it is important that we point that out as Americans we realize that," he added.

Jumping off that point, his classmate Cameron Kasky added, "The spotlight is on us and it's awful and it's a horrible thought that it is that we're an affluent community, that's why initially people followed this so closely. Because this happens everyday other places."

David Hogg says white privilege is one of the biggest obstacles he's faced in his anti-gun agenda, says media wouldn't cover the incident the same way in a black community "no matter how well those people spoke."

It seems that for both these students the only solution then is to start a full on revolution.

In an interview with ABC News, Hogg said that for him this is now the start of a lifelong mission.

Then at the March for Our Lives rally, Kasky told the crowd, "Welcome to the revolution."

#MarchForOurLives 12:20 pm ?? Crowd cheering @cameron_kasky as he kicks this off. “Welcome to the revolution.” pic.twitter.com/HNSgm936wG

Aside from envisioning a world without the NRA and with much tighter gun control, the details on that revolution seem pretty slim.

But, at least one student gave an idea of what new world this group envisions.

Edna Chavez, whose brother was tragically killed in Los Angeles due to gun violence, offered the suggestion of a Department of Restorative Justice in schools instead of armed police.

"How can we expect change when my school district has its own police department? Instead, we need a Department of Restorative Justice."

Edna Chavez, Student from Los Angeles speaking at the March for Our Lives, Washington DC about the death of her brother

Restorative justice is simply a different way of treating criminals with an emphasis less on punishment, and more on rehabilitating the offender back in to society. As noted by UNICEF, "Restorative justice is an approach in which the victim/survivor and offender, and in some cases other persons affected by a crime, “participate actively together in the resolution of matters arising from the crime, generally with the help of a facilitator.”

This approach sounds as if it has some merit in its intention, but the evidence does not quite show that the process actually works.

New York City has tried "restorative justice" and according to teachers on the ground, it has been a collossal failure.

But so far this school year, the Tribune reports students have suffered little consequence for infractions as serious as groping a teacher and bringing hollow-point bullets to class.

“You have to have consequences,” Chicago fifth-grade teacher John Engels told the paper. “If you knew the cops weren’t going to enforce the speed limit…you’d go 100 miles an hour.”

In Syracuse, meanwhile, teachers complain student behavior has worsened since the school district collapsed discipline structures in favor of restorative justice practices. They say teens are more apt to fight, mouth off to teachers and roam the halls under the more lenient policy. They’re even seeing increasingly violent behavior among elementary school children.

Los Angeles Unified School District is seeing a similar spike in campus offenses after its school superintendent followed federal orders to reduce suspensions of African-Americans. Even threats against teachers are ignored, as administrators’ hands are tied by the new policy.

“I was terrified and bullied by a fourth-grade student,” a teacher at a Los Angeles Unified School District school recently noted on the Los Angeles Times website. “The black student told me to ‘Back off, b—h.’ I told him to go to the office and he said, ‘No, b—h, and no one can make me.’ ”

I’m going to torture you. I’m doing this because I can’t be removed.

- One student to teacher Allen Zollma

Complained another LAUSD teacher: “We now have a ‘restorative justice’ counselor, but we still have the same problems. Kids aren’t even suspended for fights or drugs.”

In neighboring Orange County, teachers are dealing with increasingly violent and disrespectful student behavior since schools there also switched to the restorative strategy.

Recently mandated “positive interventions” have only exacerbated discipline problems in the largely minority Santa Ana public school district, where middle-school kids now regularly smoke pot in bathrooms — some even in class — and attack staff — spitting on teachers, pelting them with eggs, even threatening to stab them, according to the Orange County Register.

It should not be surprising then that students advocating for infringement upon the second amendment rights of millions of Americans are also calling for a world in which discipline is essentially tossed aside. Typically, one should ignore these banal calls for revolution and restorative justice as leftwing rantings of children who have yet to experience adulthood and have not had the opportunity change their perspective and worldview. But, that is a little difficult when there are 500,000 or so cheering along mindlessly.