'March for Our Lives' Comes to DC 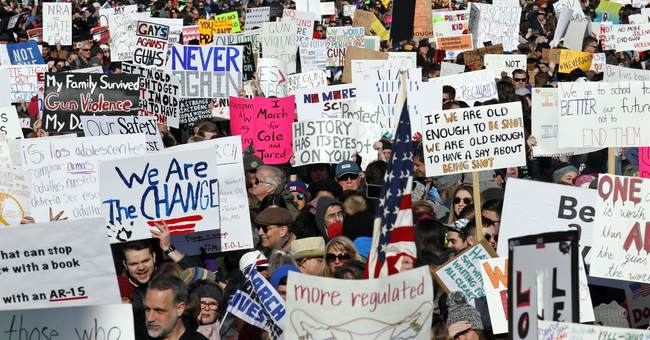 The school shooter at Marjory Stoneman Douglas High School in Parkland, Florida left 17 Americans dead on February 14, 2018. In response, debate has engulfed the nation, week in and week out, since the horrific tragedy.  Today, that debate culminates in the protest known as “March For Our Lives.”

It is expected that more than 500,000 protesters will arrive in Washington, DC with hundreds of thousands more across the nation. But, what exactly are the “March For Our Lives” protesters demanding? According to March For Our Lives website, it appears pretty simple and straightforward:

“On March 24, the kids and families of March For Our Lives will take to the streets of Washington DC to demand that their lives and safety become a priority and that we end gun violence and mass shootings in our schools today.”

It would be a safe bet to say that 99.99% of Americans want to end gun violence and stop mass shootings in schools. The groups’ solutions, however, can and should be debated if they make that goal any easier.

Their three solutions are as follows according to their petition:

Our elected officials MUST ACT by:

1. Passing a law to ban the sale of assault weapons like the ones used in Las Vegas, Orlando, Sutherland Springs, Aurora, Sandy Hook and, most recently, to kill 17 innocent people and injure more than a dozen others at Marjory Stoneman Douglas High School.

2. Prohibiting the sale of high-capacity magazines such as the ones the shooter at our school—and so many other recent mass shootings used.

3. Closing the loophole in our background check law that allows dangerous people who shouldn’t be allowed to purchase firearms to slip through the cracks and buy guns online or at gun shows.

But, these three demands mean that many Americans who disagree with their requests, but still want to end gun violence, will be excluded from the conversation all together. The Daily Caller's Benny Johnson recently recorded two of  them; Marjory Stoneman Douglas student Kyle Kashuv and Andrew Pollack, father of Meadow Pollack who died while protecting her classmates.

Here are some speakers you will not hear a the March For Our Lives tomorrow.

1. Andrew Pollack, father of Meadow Pollack, who was murdered shielding her fellow classmates

Others, such as Townhall’s Micah Rate, point out that the march clearly delves into other topics as well.

So far the rally before the #MarchForOurLives protest has touched on racism, police brutality, poverty, etc. Not just gun violence.

It should be noted the march is heavily protected by armed guards.

Other tidbits here in D.C.: security is heavy. Shirts are for sale everywhere. Starbucks is a no-go, y’all #marchforourlives pic.twitter.com/T1ywhag6w9

There will be plenty of coverage from citizen journalists taking photos, videos, and tweeting everything and anything that occurs at the march in DC today and around the country. Townhall will cover it all.