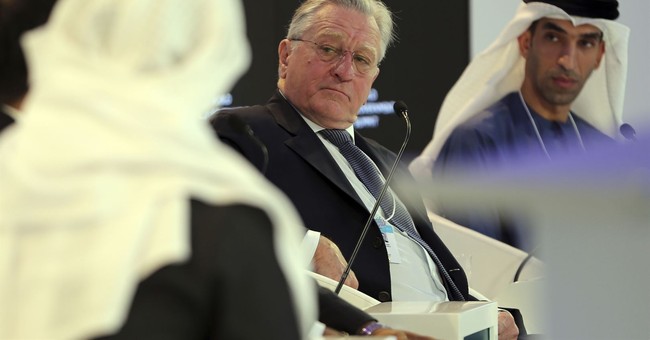 Speaking to crowd in Dubai, De Niro joked that he was visiting from a country that was temporarily insane, if not backward thinking.

"I am talking about my own country, the United States of America. We don't like to say we are a 'backward' country so let's just say we're suffering from a case of temporary insanity," the actor said in reference to recent remarks and policy made by the head of the Environmental Protection Agency, Scott Pruitt.

According to the Associated Press, De Niro’s line received laughs and applause. The actor has criticized Trump in the past for what he views as bad environmental policy in addressing climate change and thereby harming the earth's inhabitants. However, the actor regularly serves a nearly endangered species at the restaurant chain, Nobu, that he co-founded in 1994.

De Niro’s restaurant received massive criticism in 2009, after a documentary called The End of the Line exposed the use of Atlantic Blue Fin Tuna for several of their dishes. The Atlanatic Blue Fin Tuna suffers from overfishing, which has depleted its numbers and has made the fish one of the most expensive in the entire world.

"It’s astounding lunacy to serve up endangered species for sushi," the actor and writer Stephen Fry said at the time. "There’s no justification for peddling extinction, yet that is exactly what Nobu is doing in restaurants around the world." A member of Greenpeace compared serving bluefin tuna to whipping up a "rhino burger" or "tiger steak." Greenpeace investigators later DNA-tested the fish at Nobu to confirm that it was selling bluefin. Nobu’s sole response was to add an asterisk next to bluefin tuna on the menu, reminding customers that it was "environmentally challenged."

But, according to The Ringer, Nobu never actually removed the fish from their menu. One of the primary reasons is that while population numbers are diminishing and concerning, the fish has not actually been added to the Endangered Species list. "There are stiff penalties for violating the Endangered Species Act. The trouble is, it’s not good enough for an animal to simply be endangered?—?it has to be added to the official list, and so far, no governing body has done so. Bluefin just isn’t endangered in the right way," The Ringer says.

Nobu has 30 locations worldwide. Perhaps De Niro has requested that the chain removes the nearly endangered species in order prevent further catastrophe in the midst of global climate change, but a 2007 USA Today article says that De Niro has a very tactful approach in his business operations.

De Niro said he's very involved in the Nobu operation, but also knows when to take a supporting role.

"People want to do certain things a certain way. They have their way of doing it, like anything," he said. "You have to know when to put your two cents in and when not to."