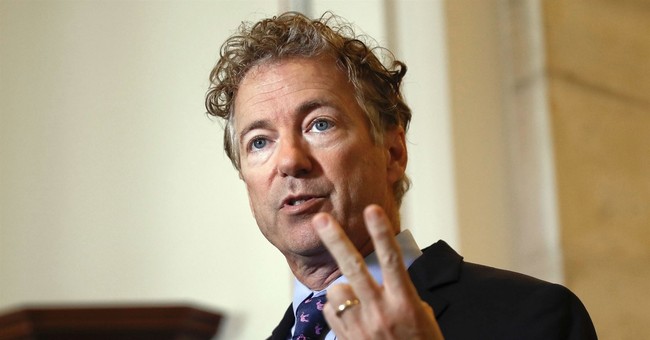 Senator Rand Paul (R-KY) met with Jake Tapper on CNN's State of the Union Sunday morning to discuss the government shutdown and who deserves the blame for Capitol Hill's current quandary. Paul, a libertarian who tends to stray away from conventional GOP thinking, offered a "doable" solution that allows the legislative process to work itself out.

Paul said the American people see though "partisanship and gamesmanship," when politicians claim the opposing party does not want to fund the military and pay our soldiers.

Sen. Paul then offered a solution which he claims was rejected by Democrats.

"I gave them the answer. Here’s the answer how you solve this today. Republicans promise, guarantee in writing, there will be one-weeks debate on immigration and a vote on immigration sometime in the next month, in the house and senate, " he said. "Now when I presented this to Senator Durbin, they said, 'Oh, no, we want a guaranteed passage on a must pass bill.'"

Sen. Paul explained that was simply an unreasonable request but his solution would allow a bill to come to fruition that would produce compromise on both sides.

“It's, like, well nobody gets a guaranteed passage. So, I do not think they’re going to get that. But, what about a guaranteed week? Open amendments, I get to present amendments, everybody does, which rarely ever happens. Do the same thing on the house side, you’ll get two different bills go to conference, work out our differences, and there could be a new immigration bill in the next month. I think that’s very doable."

As for why that was not possible in the first place,  Paul claims that attempting to force immigration into the spending bill would have produced an unwanted result for everybody involved. "The reason that’s hard on the spending bill, is we don’t all agree to what the fix is on immigration. And rather than try to work out a deal in advance. Put it on the floor and let the deal work itself out as the legislation comes to a conclusion.”

The federal government is currently shutdown after Democrats and the GOP failed to reach the necessary votes to continue funding the government for the next month. The GOP is branding this the "Schumer Shutdown," a reference to Senate minority leader Sen. Schumer (D-NY). The Democrats claim the blame falls solely on President Trump.

It is unclear how long this shutdown will last though another vote is scheduled for 1:00 AM Monday morning.