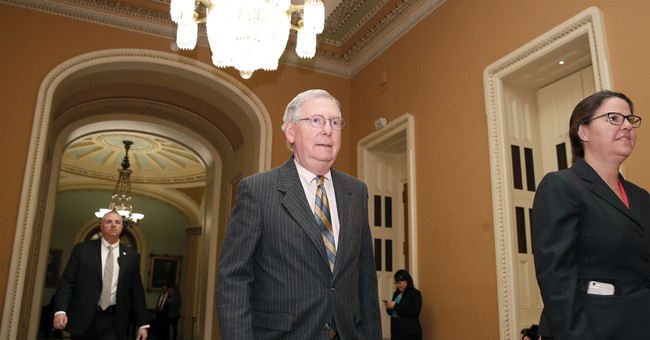 President Donald J. Trump and Senate Majority Leader Mitch McConnell (R-KY) lambasted Democrats Saturday morning for their refusal to compromise on illegal immigration and forcing a government shutdown late Friday night. The Senate failed to reach the 60 votes necessary to continue funding the government after Democrats, led by Sen. Chuck Schumer (D-NY), refused to support any spending bill that did not also address the problem of the Deferred Action for Childhood Arrival (DACA) program.

DACA was an executive order issued by President Barack Obama in 2012 that granted protections for illegal immigrants brought into the country as children. Roughly 800,000 illegal immigrants depend upon these protections to avoid deportation. The executive order, long thought to be unconstitutional, was rescinded in September 2017 by President Trump. Instead, President Trump sought to limit executive overreach and gave Congress an ultimatum of six months to form an immigration reform bill that he could sign that would also address DACA recipients.

However, with the six month deadline approaching, Democrats wanted to include DACA provisions in this week's funding bill, which would keep the government open until a larger solution could be reached. That original spending bill, crafted mostly by the GOP, included a six year extension for the Children's Health Insurance program, which millions of children depend upon for healthcare. The GOP wanted immigration reform to have its own bill and not be lumped in with this funding bill. GOP leadership maintains that DACA is entirely irrelevant to the funding of the government. Yet, Democrats refused to vote for the bill and tried to force amnesty before a reasonable compromise could be reached.

After the 12:00 am deadline passed Saturday morning, Sen. Mitch McConnell harshly criticized Sen. Chuck Schumer for using illegal immigration as a wedge to divide and shutdown the government. McConnell tweeted, “#Senate Democrats now say that illegal immigration should take priority over keeping the government open at all. Nothing for opioid treatment centers, #Veterans, or the families of fallen soldiers. Nothing for the nearly 9,000,000 American children on #CHIP.”

Earlier in the day, McConnell gave remarks from the Senate floor saying, “This vote should be a ‘no-brainer.’ And it would be – except that the Democratic Leader has convinced his members to filibuster any funding bill that doesn’t include legislation they are demanding for people who came to the United States illegally. What has been shoehorned into this discussion is an insistence that we deal with an illegal immigration issue.”

The Senate leader then added, “He’s insisted that he won’t support any legislation at all for the American people – no matter how noncontroversial or how bipartisan – unless we pass a bill on illegal immigration first.”

“If that means shutting down funding for veterans, military families, opioid treatment centers, and even federal grants to his home state of New York — so be it. If it means throwing a wrench into the gears of the U.S. economy, just as Americans are starting to feel the benefits of historic tax reform – so be it. If it means failing to renew the children’s health program which the House-passed bill funded for a full six years — apparently that’s just fine with those on the other side.”

President Trump poked fun at the Democrats, saying the shutdown was their way of giving him a one year anniversary gift for first year in office.

This is the One Year Anniversary of my Presidency and the Democrats wanted to give me a nice present. #DemocratShutdown

He then echoed GOP leaderships remarks that the Democrats were holding the government "hostage" over their concern for illegal immigration.

Democrats are far more concerned with Illegal Immigrants than they are with our great Military or Safety at our dangerous Southern Border. They could have easily made a deal but decided to play Shutdown politics instead. #WeNeedMoreRepublicansIn18 in order to power through mess!

For those asking, the Republicans only have 51 votes in the Senate, and they need 60. That is why we need to win more Republicans in 2018 Election! We can then be even tougher on Crime (and Border), and even better to our Military & Veterans!

Democrats are holding our Military hostage over their desire to have unchecked illegal immigration. Can’t let that happen!

It is unclear how long this shutdown will last. Senate leaders are expected to meet Saturday to try and find a solution.