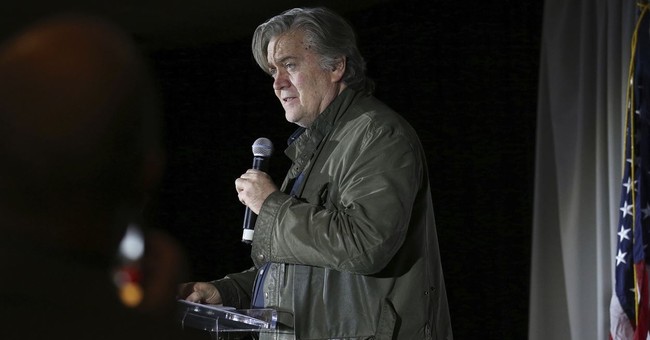 Former White House Chief Strategist and Breitbart CEO Steve Bannon apologized exclusively via Axios for statements made in Michael Wolff's book Fire and Fury regarding the president, the Trump family, and his advisers.

Bannon, one time thought to be a mobilizing force within the Trump White House, was quickly condemned earlier this week after it became apparent that he trashed the commander-in-chief to the book's author. Bannon's former boss labeled the media executive “Sloppy Steve” and issued an official statement saying that when he “lost his job, he also lost his mind.”

As Guy noted, Bannon made several colossal errors which predicated his downfall from Trump’s so-called grace. Aside from his Roy Moore endorsement campaign disaster in Alabama, Bannon’s ultimate misstep was granting Michael Wolff access to the White House which made the provocative book, Fire and Fury, possible.

“The salacious new book was written by a reporter for the left-wing Guardian, whom Bannon saw fit to entrust with extraordinary access to the Trump White House.  The result of that decision is an exceedingly unflattering and humiliating portrait, perhaps accented with made-up  or misattributed quotes and anecdotes, painted by a man with a reputation for fabulism and embellishment.  Another brilliant stroke.  Tellingly, however, someone who isn't denying his own quotes is none other than Steve Bannon,”Guy wrote.

“Insulting Ivanka, calling Don Jr. "treasonous," and implicating the president in Russiagate.  If you wanted to concoct a recipe to utterly infuriate Donald Trump, this would be it.  Ridicule his favorite child as "dumb as a brick," toss around Maxine Waters-style characterizations of the Trump Tower meeting as "treasonous" and "unpatriotic," and fuel the Left's Russia-collusion narrative by asserting that candidate Trump himself was involved in the sketchiest meeting of that whole saga,” Guy added.

But today, he is apologizing for those comments. Axios first published the following statements from Bannon:

Furthermore, he says that his  comments that Don Jr.’s  infamous Russian meeting  in Trump tower was treasonous:

An interesting facet of this apology is that Bannon is in no way denying that he made these comments, simply that he is sorry and that he regrets his lackadaisical response once his statements became public.